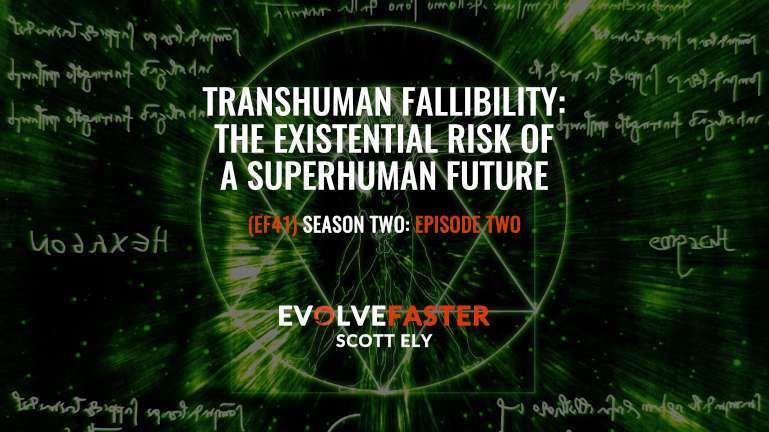 PLAY | DOWNLOAD Technology is like a powerful drug that can either improve you or make you miserable and dependent. Is it our evolutionary fate that we will become superhuman? Or is the codebase of human nature inherently too fallible for the story of transhumanism to end well? More...

The Big Question driving Episode EF41 is … why are humans so fallible?

Will Storia is a graduate student whose Ph.D. work in history and evolutionary psychology is evolving into a manifesto about radically changing the trajectory of civilization.  On his show, The Next Evolution, he argues to a global audience that we are at the edge of an abyss, about to hand off what remains of our humanity to machines. His latest guest is John Weber, a revolutionary techie, who believes technology will solve all of humanity’s problems. As they publicly clash with the world watching, Will worries how people might twist his ideas; because it’s increasingly obvious that John’s transhuman ideology has already become a religion.

To explore if technology might be the quick solution for every problem humanity is facing, we must look deep into the core of what makes us tick — human nature. Transhumanism will likely exponentially multiply all of our human weaknesses. Does the hard-wired human desire to seek power over others pose a serious problem for our inevitable evolution of wanting to be superhuman? Also, Yuval Noah Harari believes dataism — the trend towards reducing humans down to our data and trusting AI to make all our decisions — has civilization on a crash course with becoming useless. Is this our fate? Or will technology open doors to new heights for humanity?

SHOW NOTES: This episode is dedicated to Yuval Noah Harari. See the EF41 Show Notes for details of the dedication, inspirations, references, selected quotes and more.