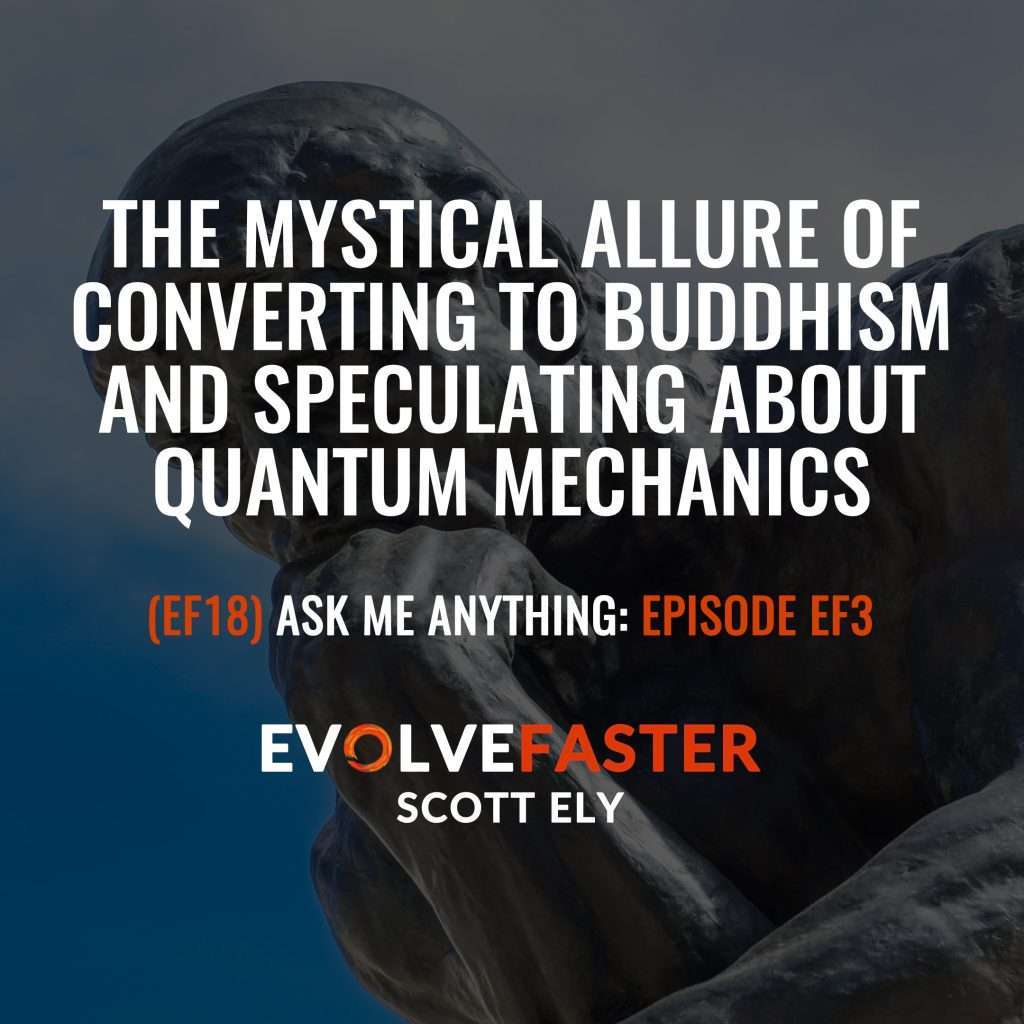 The first episode of the first season of the Evolve Faster Podcast Episode is driven by the big question What Am I Supposed To Do. We as human beings are known for making bad decisions in the moments of desperation. And what crisis than the existential crisis? Possibilities are limitless, correct answers next to none and there is no how-to manual. Ready to start? 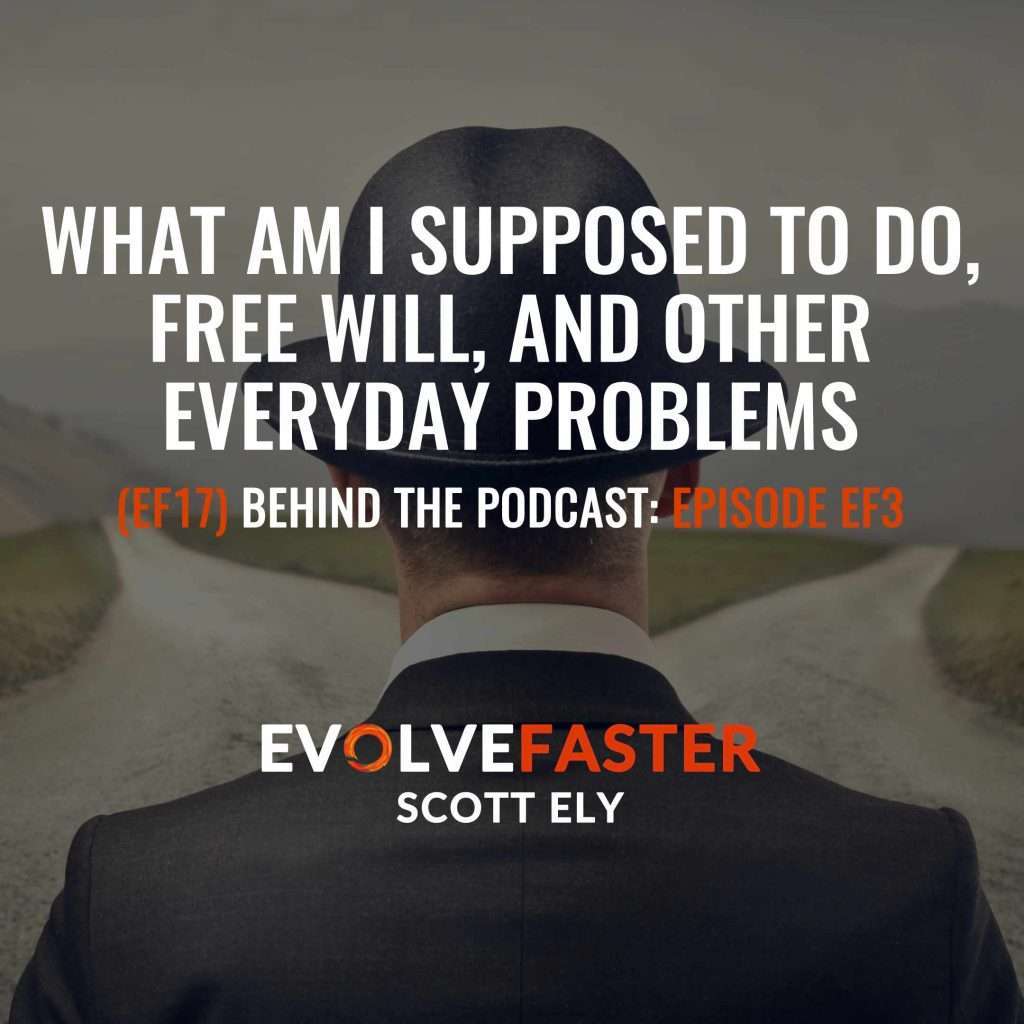 The first episode of the first season of the Evolve Faster Podcast Episode starts with the big question that’s always lurking in your head: “What Am I Supposed To Do?” And it’s not referring to your lunch plans. Instead, it’s asking what will you until the inevitable day comes when you’re 6 feet underground to make sure you live a satisfying life of meaning? And let’s assume there’s no lunch down there to worry about anyway. 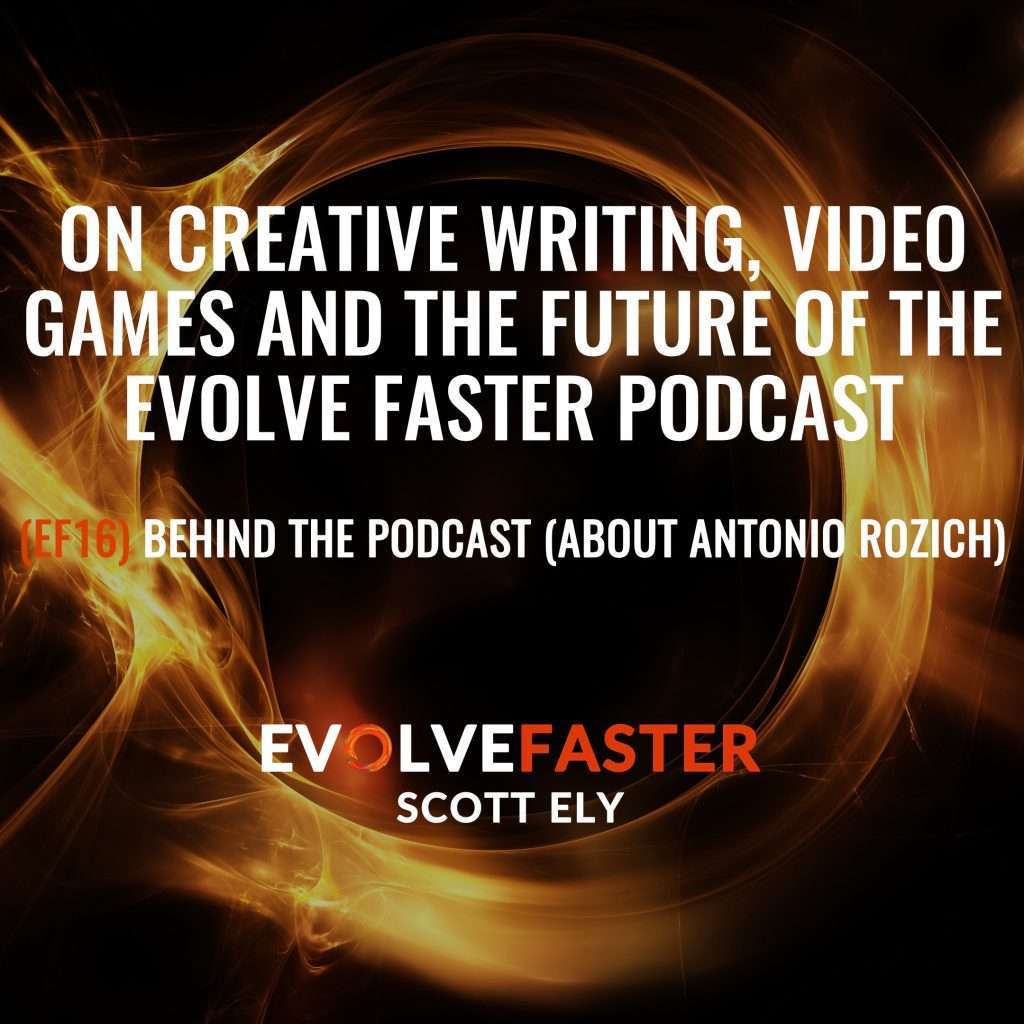 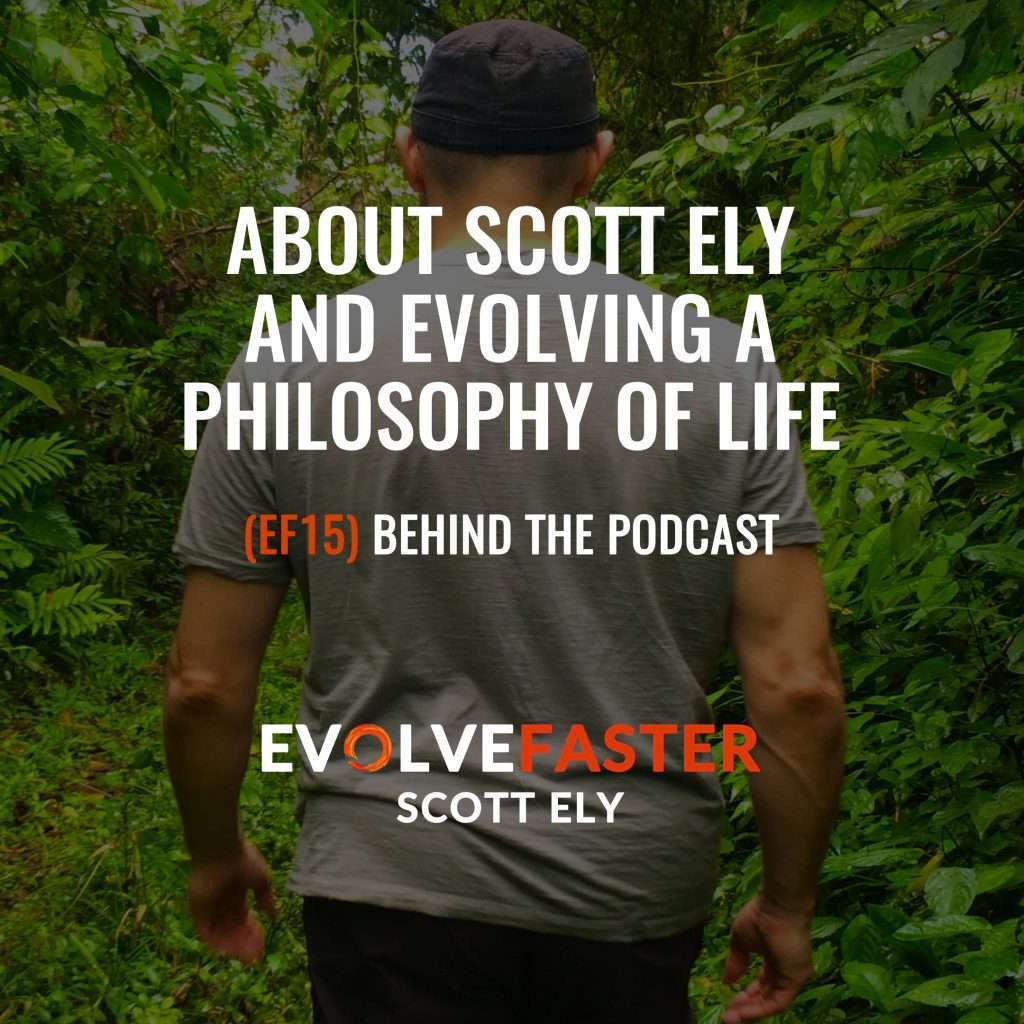 Welcome to the first Ask me Anything (AMA) Episode, which will be loosely framed around the question … Who controls your narrative? Evolve Faster is my laboratory to write and think about ideas in an attempt to learn to be a better human…which can be surprisingly difficult. But with a series of minor mindset shifts, it doesn’t have to be so hard. 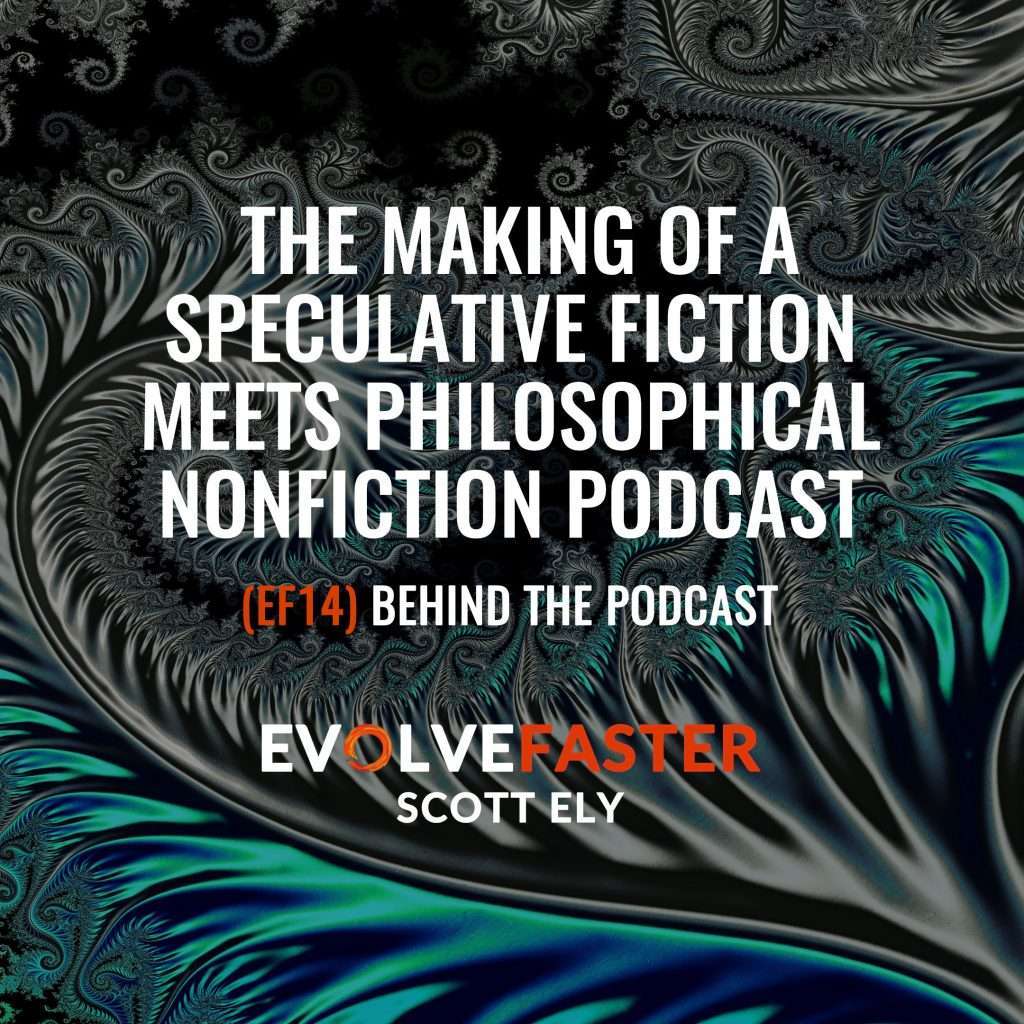 Pose yourself this thought experiment: What if you could start over with a brain unhindered by evolutionary hangovers? A fresh life with no societal baggage and an aspirational soul with a complete focus towards finding meaning to your existence? In other words, what if that nagging question—what in the hell am I supposed to do?—was easy to answer? 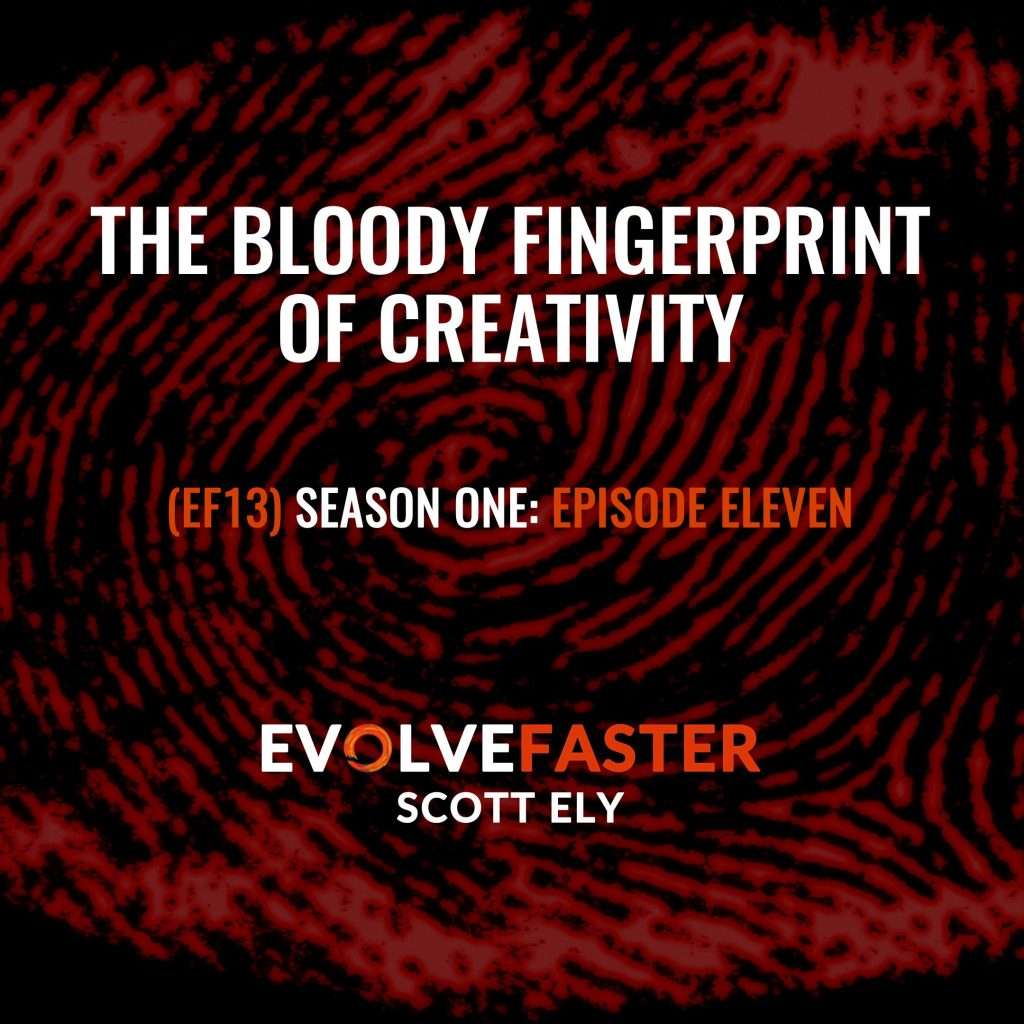 Facing serious amnesia, Eric Clemens with the help of Dr. Eden Harper tries to recollect his lost memories. Dr. Harper takes an unconventional road not only to help Eric track his past, but to create a foundation for his future as well. As they dig deeper and deeper, Eric has to face demons he didn’t even know existed. This episode of the Evolve Faster Podcast will investigate what art is and how do we perceive the concept of creating art. Through psychological theories ranging from William James to Carl Jung with a neuroscientific backup, the goal is to demystify the long-living mystery as it turns out–what art is and what we believe it to be are two entirely different ideas. Even more important, people who are capable to create art might not just be a chosen few. 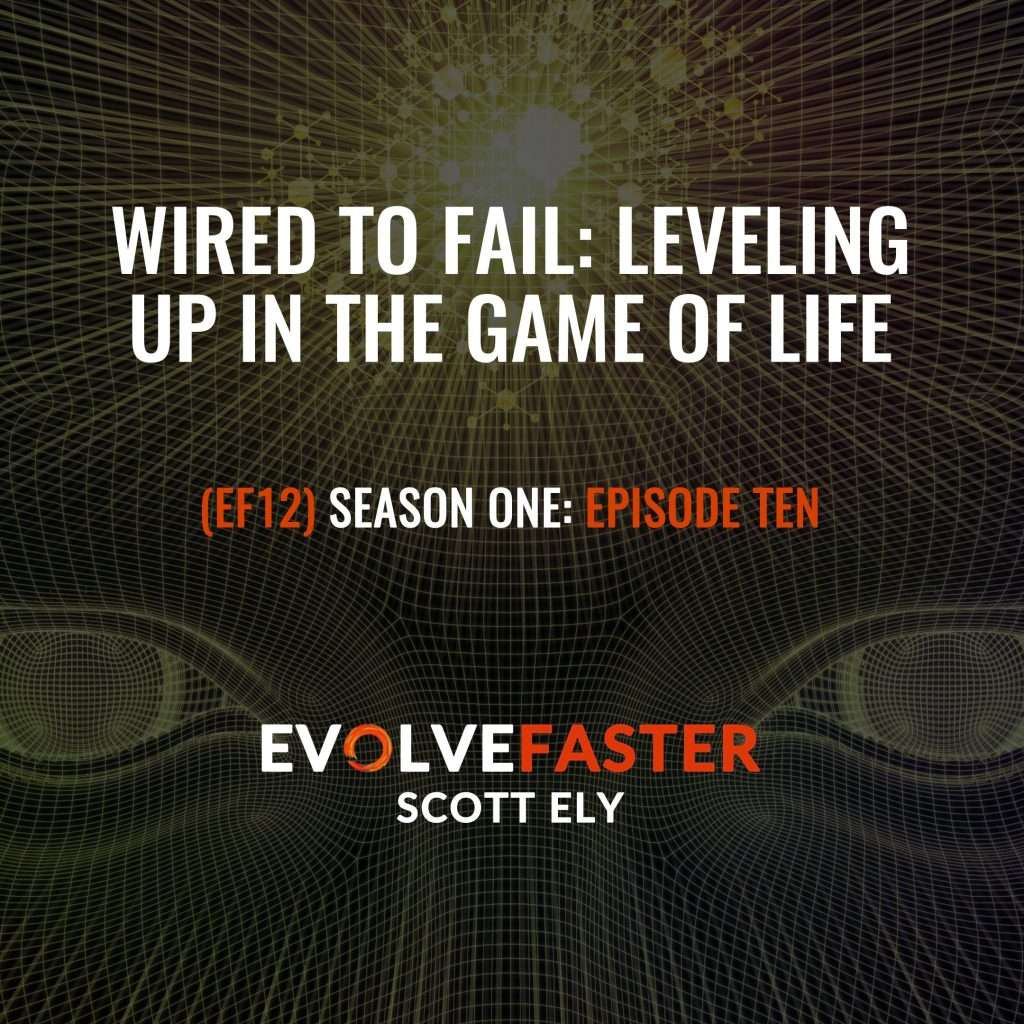 Infuriated by the risk-averse approach of his company, Vihaan Raid decides to design his latest game on his own. A widely renowned game developer known to the gaming world as “Koji,” believes he can entirely change how humans see life with his radical new video game concept. He teams up with a respected psychologist to make sure his vision will manipulate the human psyche as he suspects it will—a critical factor to the game’s potential. As Koji slowly reveals secretive details of his mysterious concept, Isaac becomes more and more suspicious of the game’s true intentions. Fear is engrained in all of us, but as Erich Fromm described, there are two main types. First are sadomasochistic characters who kill the fear by being dependent on either controlling or being controlled. Second is the revolutionary character who embraces the fear of being a free human. Similarly, the famous philosopher Friedrich Nietzsche thought there is little to no difference between success and failure when it comes to their functionality. Human mind is engraved with a false belief that success is heaven and failure is hell. But this couldn’t be further from the truth. Sigmund Freud believed our unconscious thoughts and desires define us. So maybe, heaven is a place where the unconscious desires define us, but not control us and hell… well, just look at the commercials. 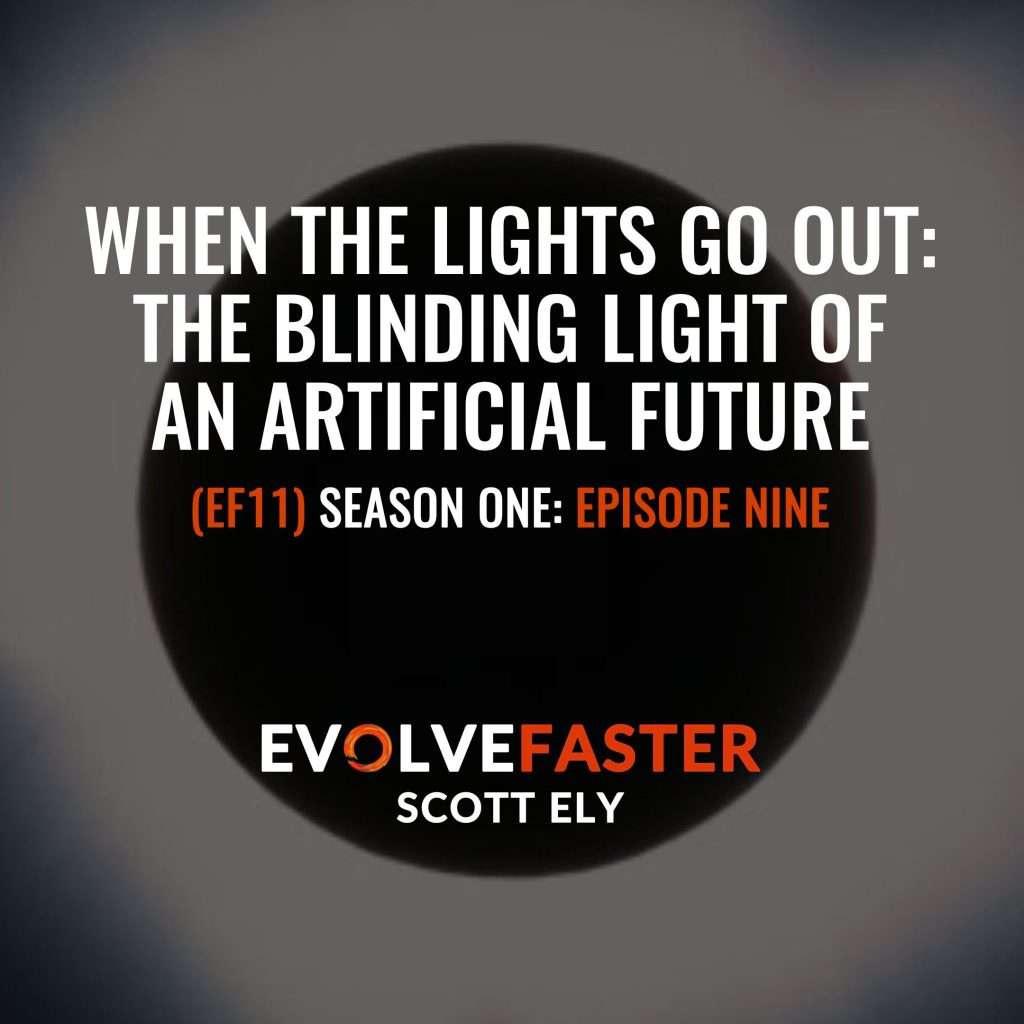 Aldford Herbert, a famous science fiction writer, is on the brink of finishing his latest novel about a realistic, dark future of artificial intelligence. A stroke of luck provides him with an opportunity to talk to Cynthia Butler, the mastermind behind the world’s most bleeding edge AI company. Aldford sees this as the perfect opportunity to secretly learn how precise his fictional predictions might be. What he doesn’t know is that Cynthia might just have a mysterious, and even more insidious agenda than his own. This episode of the Evolve Faster Podcast will investigate AI development from perspectives of deep learning to related neuroscience and several key technological advances in between. Technology and AI is rapidly evolving at a rate much faster than humanity ever did or could hope for. It’s not about if AI will achieve consciousness, but when will we be at least fooled into thinking it has? But does the rapid development automatically mean the end of humankind as we know it? Or is there an alternative route where co-existence is a brighter version of life as it is today? 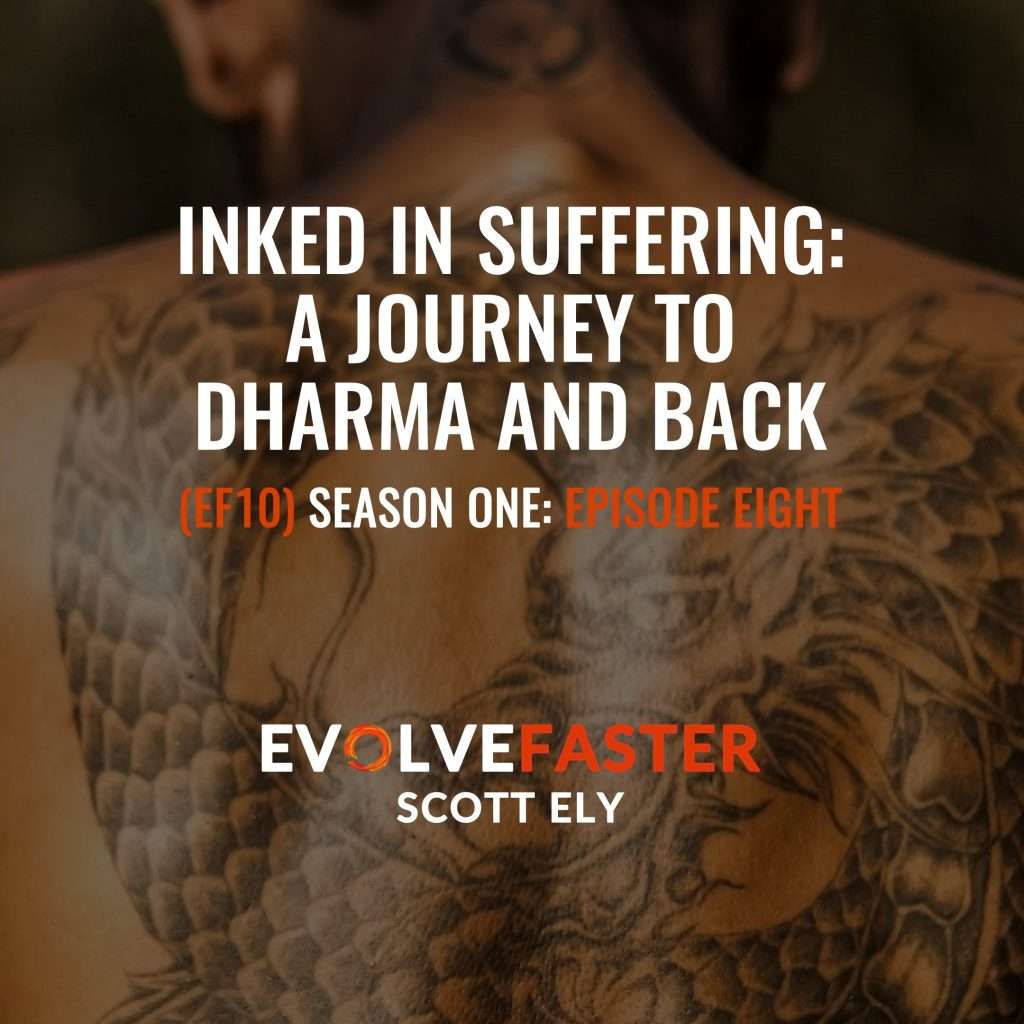 Coming from a wealthy family, most others would only dream of the life Alex leads. Every moment is another silver platter where he is handed all the best education, can have his pick of expensive items and to experience seemingly infinite joys. Although grateful for everything, Alex can’t shake the reality he isn’t happy or fulfilled by any of this at all—nor could he really even define what happiness would look like for him. But why? What could possibly be missing when having everything you want? “It’s not about the destination; it’s about the journey.” This trite expression is one of the modern favorites in a bin of overused cliches we tell ourselves when we start to lack that next hit of happiness. But is it really trite or just misunderstood? Being a cliche doesn’t necessarily make something wrong. Instead, that comes when we don’t actually change things in order to live by the message of such wise life lessons. From Ancient India and Greece, to modern Western Culture, we can find countless theories on what happiness is and how to attain it. So why is our ability to attain it no better today—and, by some measures, on the decline—even after thousands of years of intellectual progress? 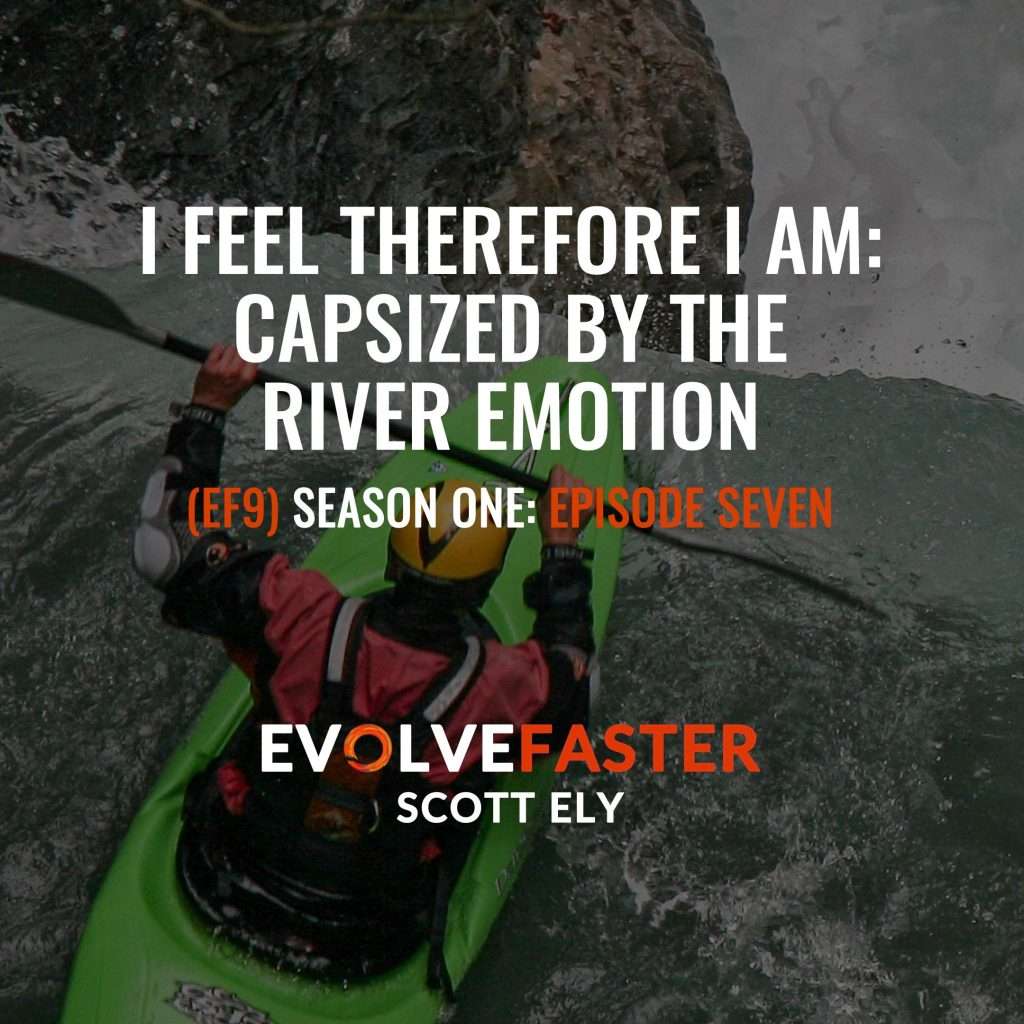 Elliott made a terrible mistake that’s been haunting him ever since. As if rafting through Class V rapids without a paddle, Elliott’s sanity is inches away from crashing into sharp rocks of guilt, shame and sadness. Where do we turn when it feels like our emotions have us hurtling out of control in dangerous waters? And is there any hope for recovery even once you’ve faced the reality of your situation head-on, in light of the power of these emotional currents? We all have emotions, but what are they and do we need them? David Hume felt we are nothing more than slaves to our passions. And maybe so! Countless theories like the Hurrah/Boo Theory show that we’ll jump onto the emotional bandwagon of the masses almost instinctively. Why? To feel safe. But is there a way to break the secure chains of emotions? Is there a way to rationalize the irrational, reason the unreasonable and be ultimately be masters of our feelings? 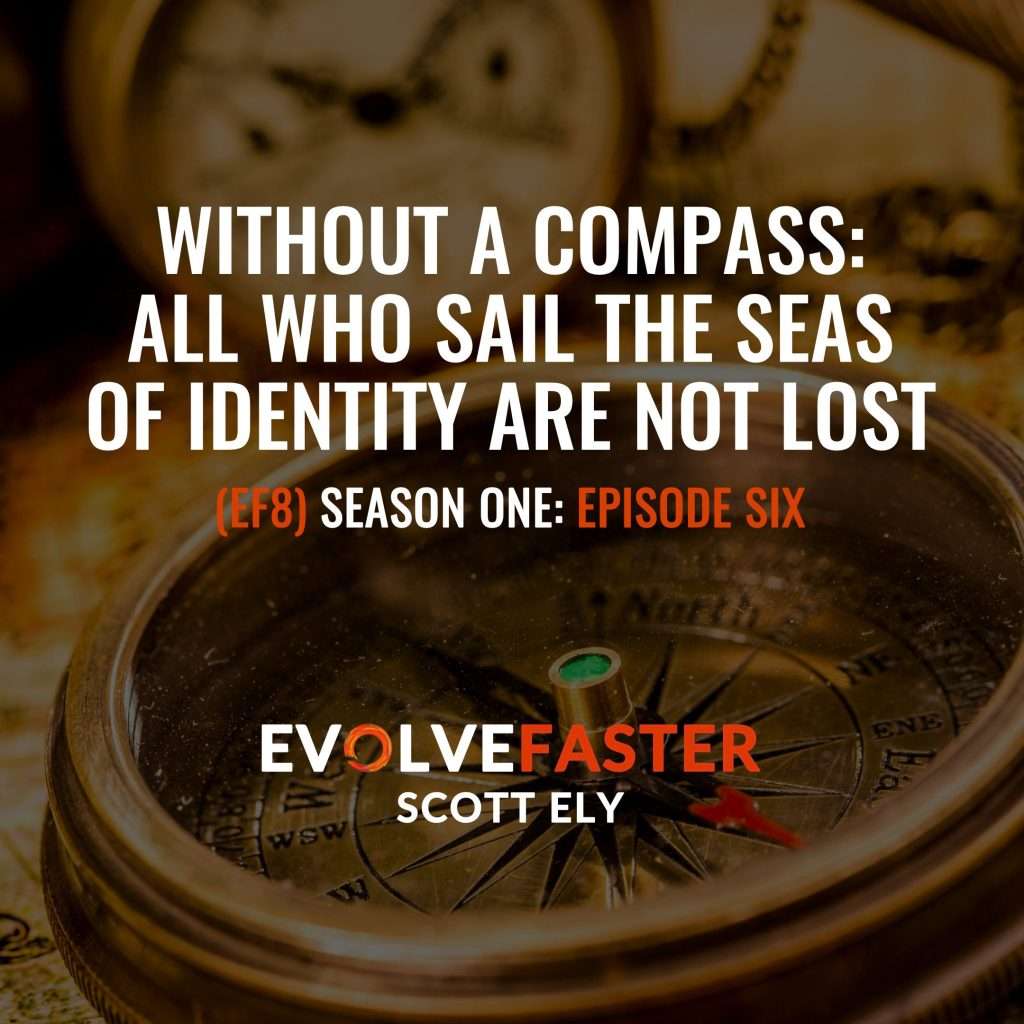 (EF8) You’re the sailor of the ship called you, and yet most people let their boats go into great disrepair and neglect. Feeling moored in the same spot for years with no clear understanding of the direction she needs to go, Lisa gets a unique opportunity to upgrade her identity boat with a chemical compass of sorts—a mysterious drug that will supposedly alter her complete identity—to supposedly better enable her to navigate through life’s rough waters. Could a change in your identity actually turn your entire life around for the better? Or are we destined to live with constant susceptibility to being lost in a sea of meaningless actions and emotions without any sort of compass to steer our ship? What defines our identity? John Locke thought it is our consciousness and the daily actions that shape who we are. Similarly, Erik and Joan Erickson created an entire step-by-step description of the phases each individual goes through. Finally, recent neuroscientific research manages to make a hard connection between various emotions we experience and our brain. Is there anything we can actually do to navigate the rough emotional waters of life any more effectively? 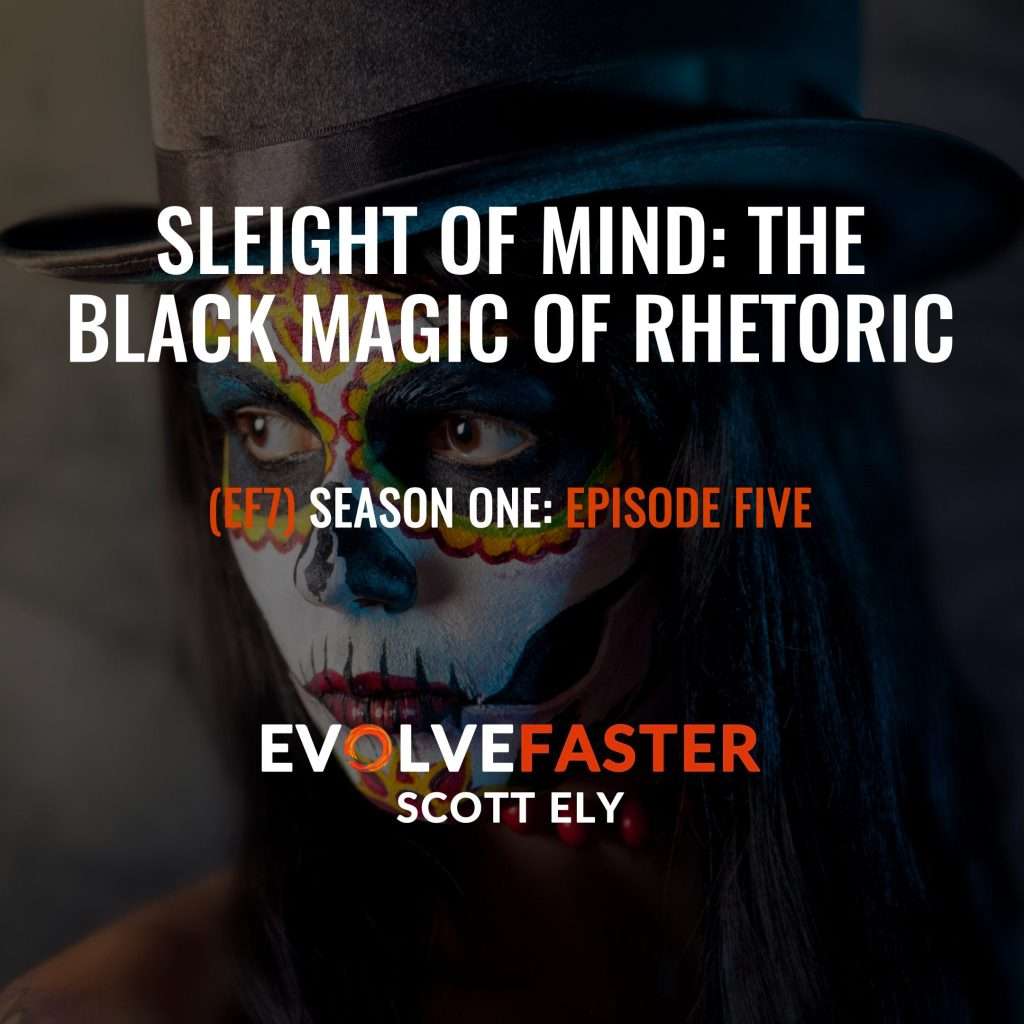 Edward, a marketing master and spokesperson for the dark arts of rhetoric and propaganda, is hired to educate a controversial businessman running for an important public office. It’s Edward’s job to bestow the black magic of verbal and written manipulation on the businessman to win the election. Where the tongue is quicker than the mind—and the pen sharp enough to cut—are these skills a well-respected art? Or are they just cheap mental tricks wielded by insincere charlatans? Since perfected by the ancient Greeks, rhetoric has slowly devolved from a respected art into a manipulative tool used in marketing, politics and any other walk of life where mental and verbal coercion pays. Rhetoric, propaganda and the strategic use of logical fallacies are mental and verbal manipulations similar to the dark arts of black magic, in that they create smoke and mirrors to change minds to believe mistruths. And unlike a magician who deceives to entertain, these dark wizards act maliciously in pursuit of profit and power over others.