The quote above is from the Tao de Ching, a favorite book of mine supposedly written by Lao Tzu. The skepticism is because Lao Tzu translates to “Old Master,” which is quite a convenient name for the author of a book of wisdom, don’t you think? Some scholars of the Tao instead think it is more likely a book of ancient teachings — like this quote — collected from the oral tradition. Which, oddly, brings us back around to me.

I’m not an Old Master; nor will I try to play one on the internet. Sadly, I’m not a young one either. I’m just a guy who has self-experimented on his own mind, life and soul for a long time. Long enough, in fact, that it’s led to a framework of evolving self-discovery which I call Evolve Faster. If interested, you can learn more about why I chose this metaphor, which is also discussed in the first episode of the podcast.

Evolve Faster is my laboratory to write and think about ideas in an attempt to learn to be a better human…which can be surprisingly difficult! But with a series of minor mindset shifts, it doesn’t have to be so hard. I’ve been experimenting with these ideas on a daily basis for over a decade and did a TEDx talk about one narrow aspect of it in 2015. I’m sharing the platform in the hope that learning from my many mistakes might make someone else’s evolution go a little faster.

Since completing engineering/business graduate school at Northwestern in 1999, I’ve been in nonstop evolution as a writer, creative, startup, traveler and thinker. Creating this framework to Evolve Faster is a work-in-progress and I won’t always get it right. My focus is the revolutions, thinkers and startups whose big ideas have changed (or could change) everything. And my goal is to take creative risks to make art that sits at the somewhat unorthodox intersections of fiction and nonfiction, science and spirituality, philosophy and psychology.

Only better ideas and deeper questions can upgrade our collective human nature. But this movement is really about a philosophy of personal (r)evolution. The Evolve Faster platform hopes to inspire you to rethink the way you use your mind, live your life and explore your soul (for lack of a better word). Because by knowing yourself better, you can have a shot at some of that enlightenment the Old Master was talking about.

INTO THE RABBIT HOLE

Writing an About page can be as painful as reading one. So while I did my best to make the text on this page less irritating than most, it’s possible I still fell short because a short bio is rarely an interesting read. In any case, and just for fun, I decided to do a more creative version of an About page in the style of the Evolve Faster Podcast (a fiction-meets-nonfiction format).

So if the text up above left you less than inspired (and for some reason, you still want more info), please click play below to listen to a creative take on the traditional bio format. With a fictional feel, it tells the true story of how this platform came into being after doing an extreme life experiment back in 2015. 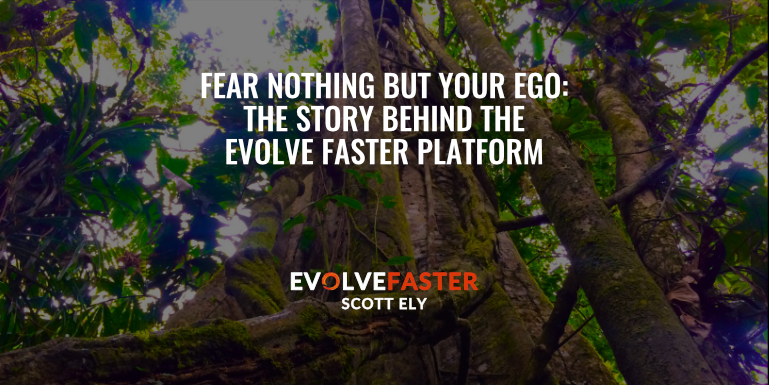 If you listened to this but still have no idea what in the hell it’s talking about, you can find out more in Episode EF15 of the Evolve Faster Podcast, titled EF15 (BTP): Behind the Podcast — About Scott Ely and Evolving a Philosophy of Life where I explain (in literal, no-drama terms) the story behind the audio in this About page bio.

And yes, the background sounds are actual recordings from this experience the Ecuadorian Amazon. The original recording is over nine hours from one of the nights and provides an incredible aural retelling of the entire tale (intense shaman chanting, ceremony rituals, jungle animals, insects, etc.). It’s no holds barred …