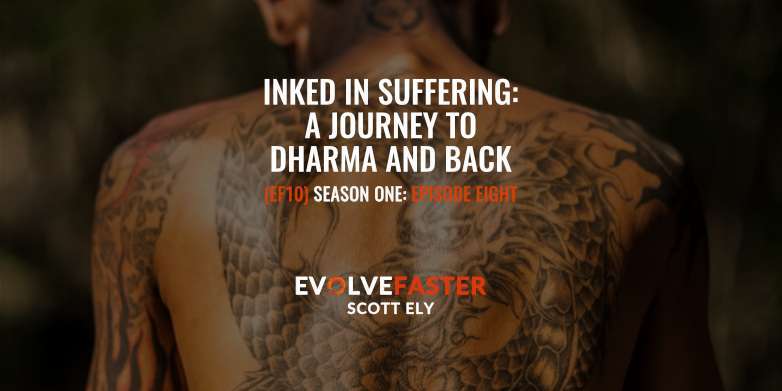 Looking to play or download the episode? Click here…(EF10) S1-E8: The Road to Happiness is Inked in Suffering (Season One, Episode Eight)

Does Happiness Define the Good?

The big question driving Episode EF10 is … Does happiness define the good? We need to be happy to feel good. Even a 4-year-old child knows this somewhere in the chaos of their still-evolving mind. Thus, it seems logical the closer we are to becoming happy 24/7, the better. But when was the last time you met someone who achieved this? And have you ever thought through the practicalities of such a scenario?

Although as a society we’re trying extremely hard to be happy, it doesn’t seem we’re doing too good of a job. Even worse, when we finally achieve happiness, it doesn’t take long for the sunny day to turn into a thunderstorm. So is it possible we got the entire idea wrong? Maybe happiness isn’t the only ingredient towards a good life? Perhaps we do need a healthy amount of sadness, anger, frustration, in which case, it’s rather all about finding the balance.

DEDICATION:  Episode EF10 is dedicated to Kurt Vonnegut, a writer whose ingenuity comes from the purposefully averageness of his perspective. Satirical irony dominates his work, managing to make people laugh out loud and still see the light at the end of some very dark tunnels in the themes of his work.

Kurt Vonnegut quickly emerged as a new star in the world of literature with novels like Player Piano, The Sirens of Titan and Cat’s Cradle. Nevertheless, both before and after fame, Vonnegut struggled with the hardships of a literary writer.

There’s a belief that people with a unique ‘funny bone’ are often the saddest people. Although this sounds like a paradox, happiness likely does come from grief, and it probably works the other way around as well. Thus, Vonnegut’s work is a testimony to this “satirical fact” about life that happiness many times comes at the price of sadness. And what can we do? His writing generally instructs us to laugh, cry and enjoy all the moments as best we can.

It’s impossible to say if Vonnegut managed to incorporate this in his life, but one thing is sure: he’s been making people around the world laugh — and think — for more than half a century.

Vonnegut and his work are the proof that life will never be just happy or sad, no matter how miserable or happy life makes us. Life will always be life and we have only one option: to ride the river we’re presented with just like the Episode EF10 protagonist. There’s wishful thinking hardwired into our system that one day life will be painless. Sorry. Vonnegut could have written his novels if that was the case.

If you need a good laugh and a fresh insight into the everyday troubles you’re facing, read some of Vonnegut’s work. You won’t be sorry:

INSPIRATIONS: Gustave Flaubert, a novelist who knew that without stupidity it’s extremely hard to be happy. Bertrand Russell, a man of many talents, who understood you have to lack things to be happy. Seneca, a stoic who taught us that nobody is constantly happy; if they seem like they are, they probably have more problems than we think. Buddha, who dedicated his life to teaching for us to be happy, we need to be sad. Episode EF10 was further inspired by Morris Mandel, John Lennon, Wataru Sato, Seneca, Aristotle, Chuang-Tzu, Voltaire, Dante Alighieri, Cliche Tattoos. For a full list of data and references please see Episode EF10 Show Notes.

Coming from a wealthy family, most others would only dream of the life Alex leads. Every moment is another silver platter where he is handed all the best education, can have his pick of expensive items and to experience seemingly infinite joys. Although grateful for everything, Alex can’t shake the reality he isn’t happy or fulfilled by any of this at all—nor could he really even define what happiness would look like for him. But why? What could possibly be missing when having everything you want?

“It’s not about the destination; it’s about the journey.” This trite expression is one of the modern favorites in a bin of overused cliches we tell ourselves when we start to lack that next hit of happiness. But is it really trite or just misunderstood? Being a cliche doesn’t necessarily make something wrong. Instead, that comes when we don’t actually change things in order to live by the message of such wise life lessons. From Ancient India and Greece, to modern Western Culture, we can find countless theories on what happiness is and how to attain it. So why is our ability to attain it no better today—and, by some measures, on the decline—even after thousands of years of intellectual progress?

“Somebody Actually Got the Mother of Cliché Tattoos!”, Tattoodo.com, https://www.tattoodo.com/a/2016/06/somebody-actually-got-the-mother-of-cliché-tattoos/ (accessed: Apr 30) 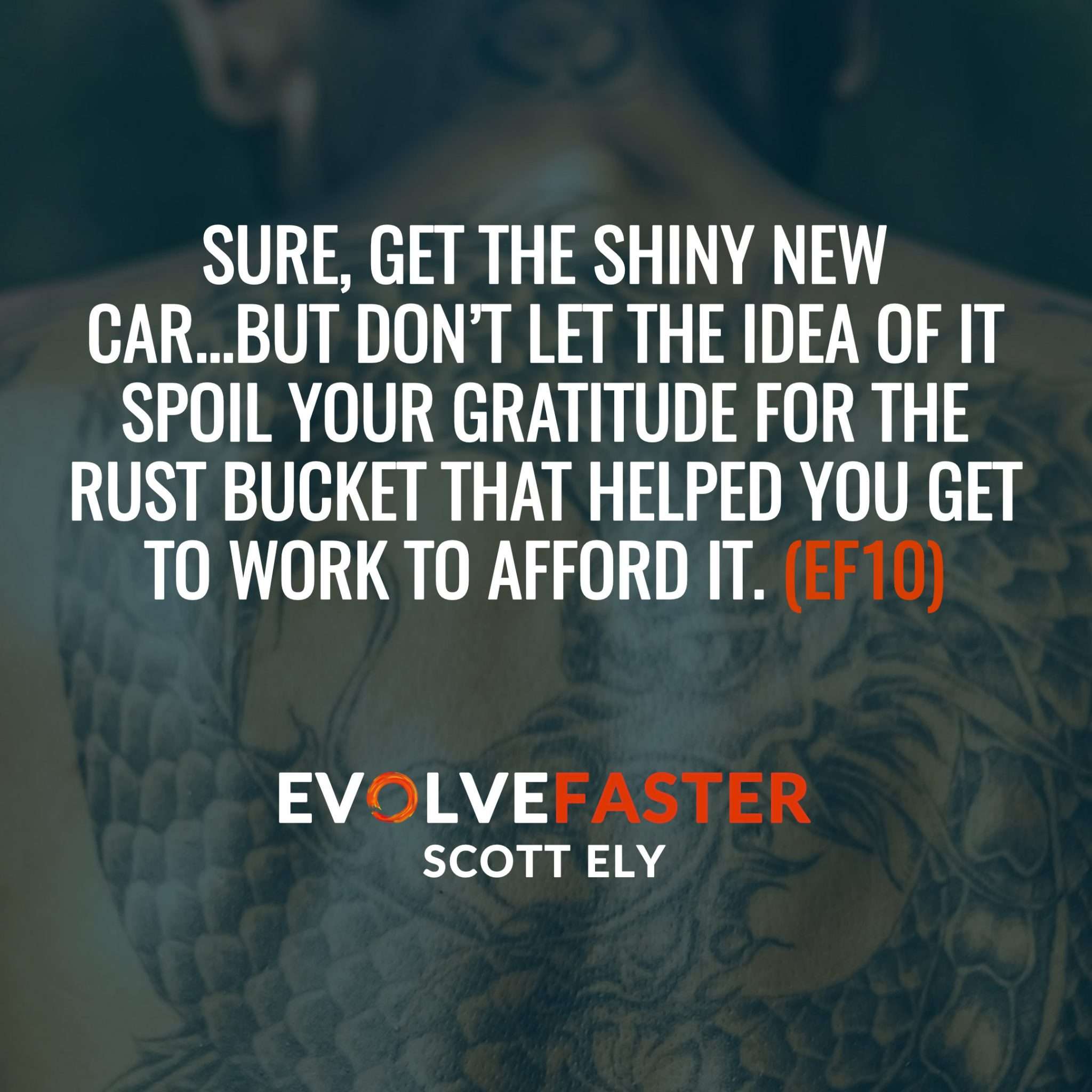 Sure, get the shiny new car … But don’t let the idea of it spoil your gratitude to the rust bucket that helped you get to work to afford it. — The Evolve Faster Podcast (Season One, Episode Eight) (EF10) 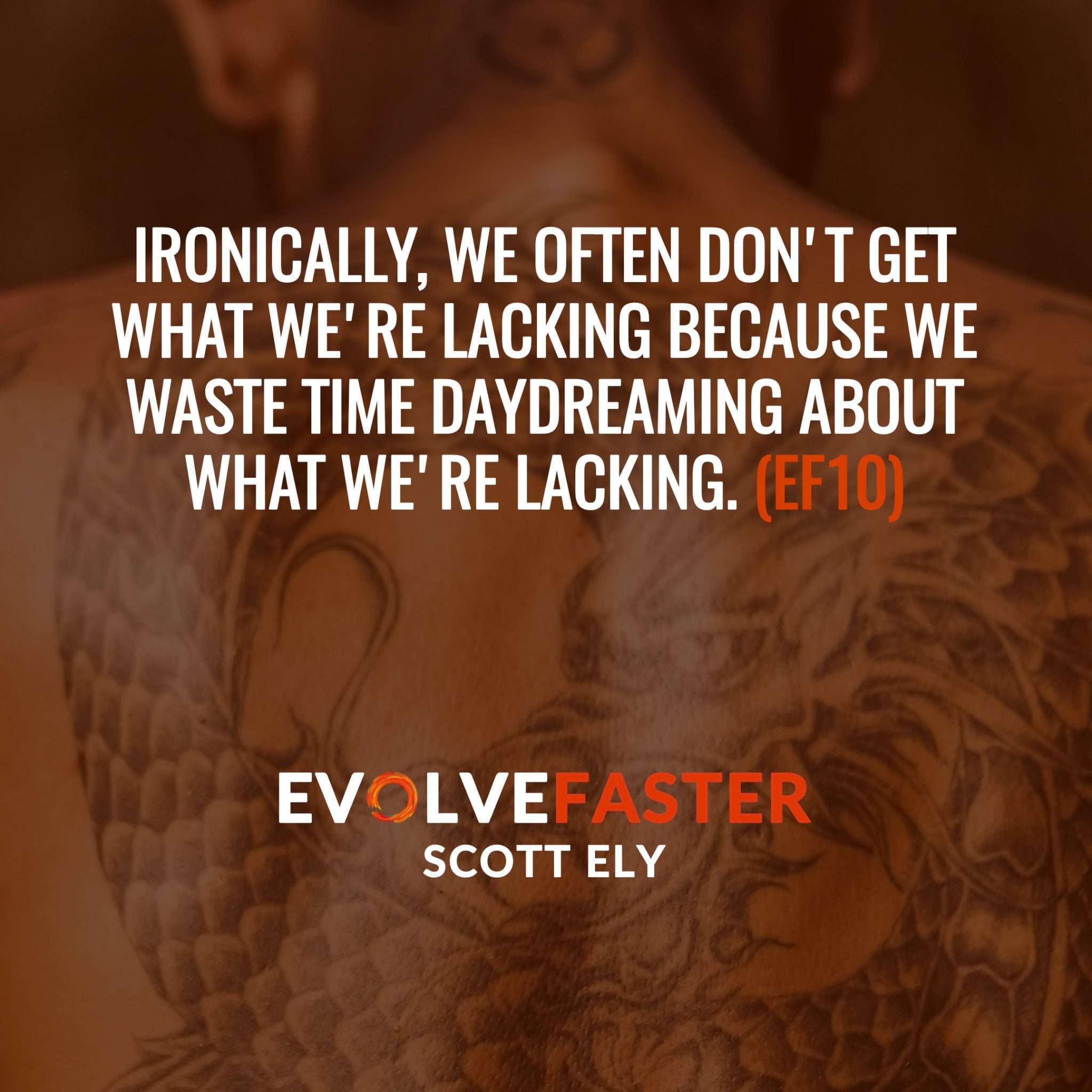 The wheel keeps on turning no matter what we do; and although we might think sadness is the element that doesn’t belong, it is as important as happiness. — The Evolve Faster Podcast (Season One, Episode Eight) 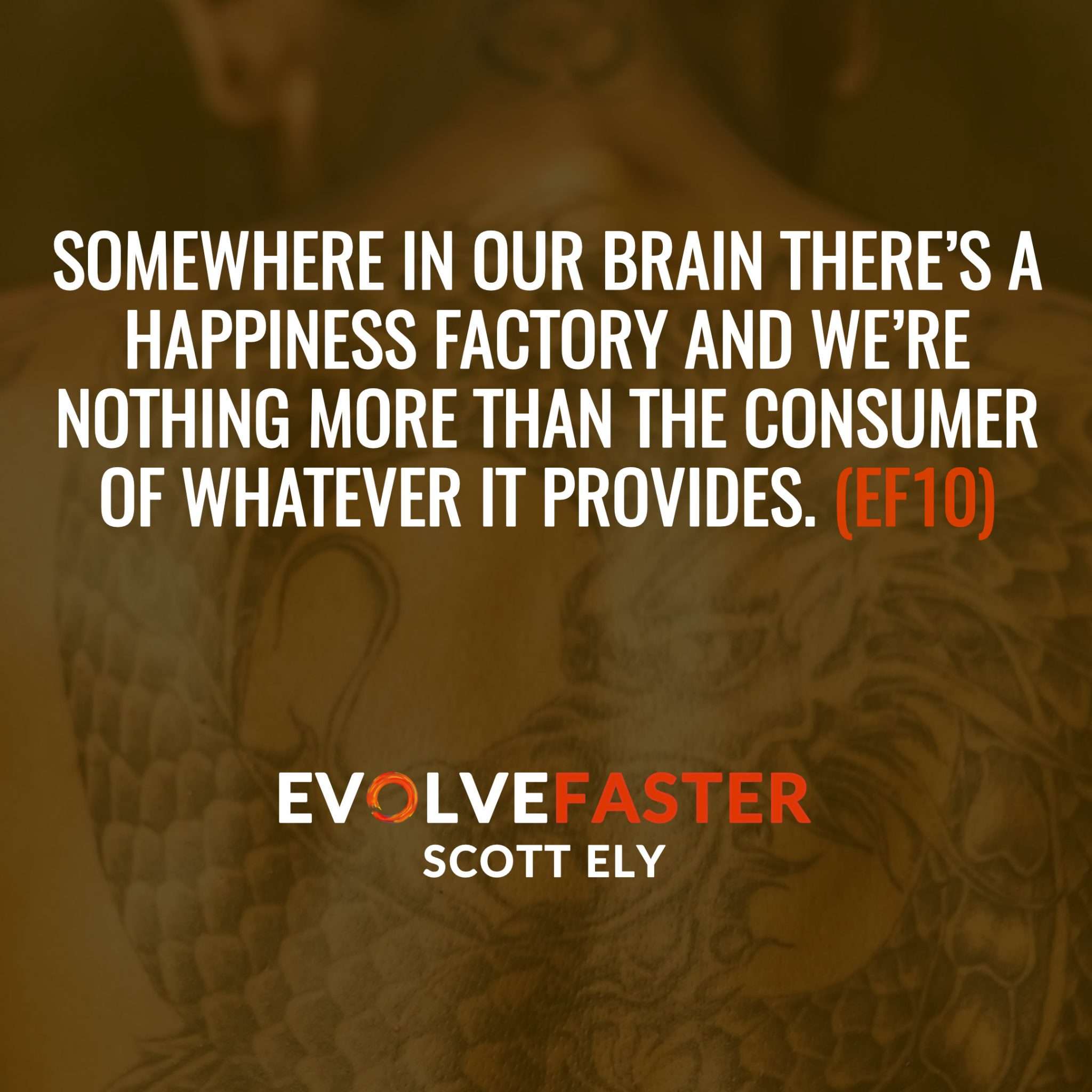 Somewhere in our brain there’s a happiness factory and we’re nothing more than the consumer of whatever that factory provides — The Evolve Faster Podcast (Season One, Episode Eight) (EF10) 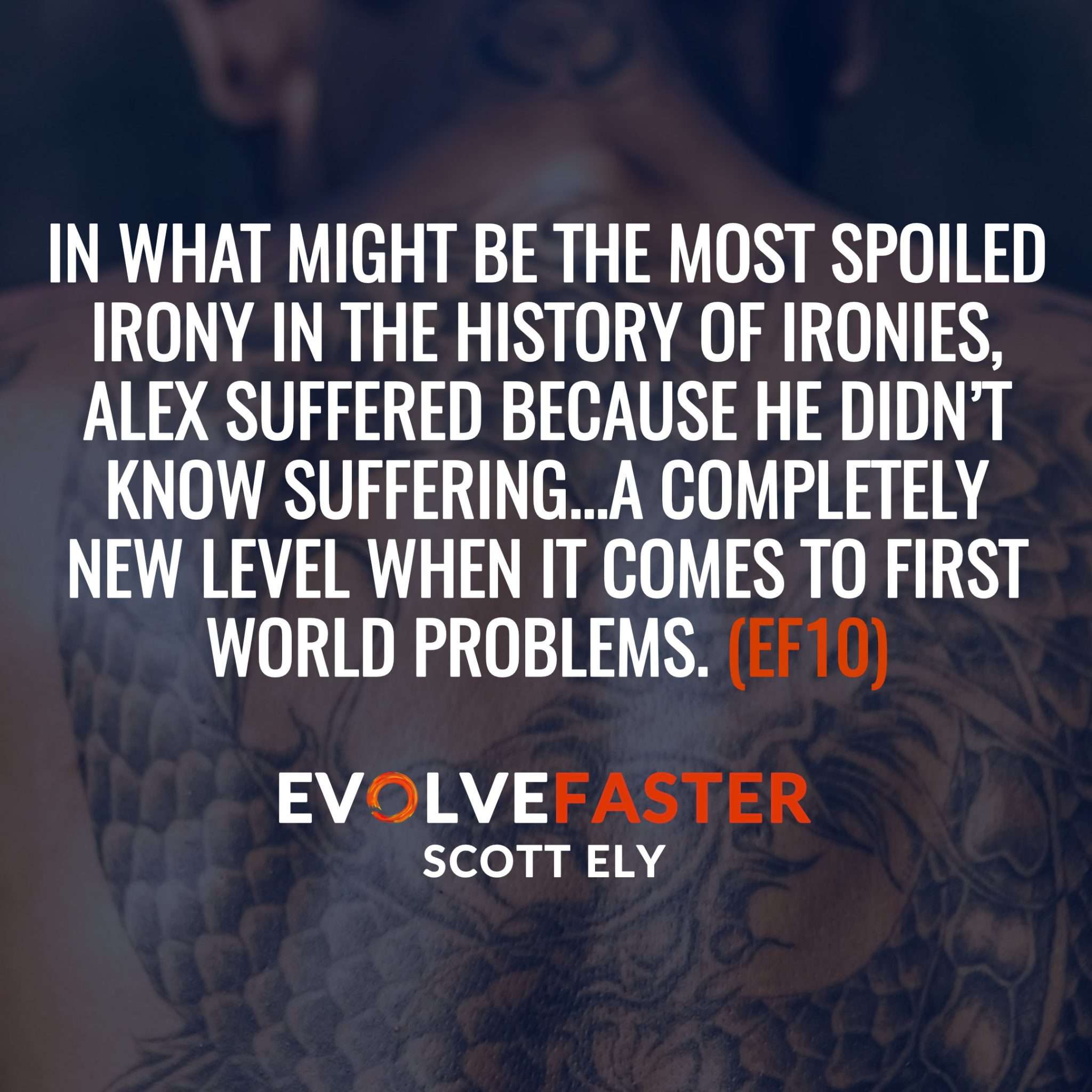 In what might be the most spoiled irony in the history of ironies, Alex suffered because he didn’t know suffering … a completely new level when it comes to first world problems. — The Evolve Faster Podcast (Season One, Episode Eight)

Season One, Episode Eight: Even though today’s world is obsessed with happiness, many measures would indicate it’s attainment is on the decline. What if happiness isn’t a lovely, attainable destination, but instead, a journey of learning to embrace day-to-day suffering? And does happiness define the good anyway? (EF10) 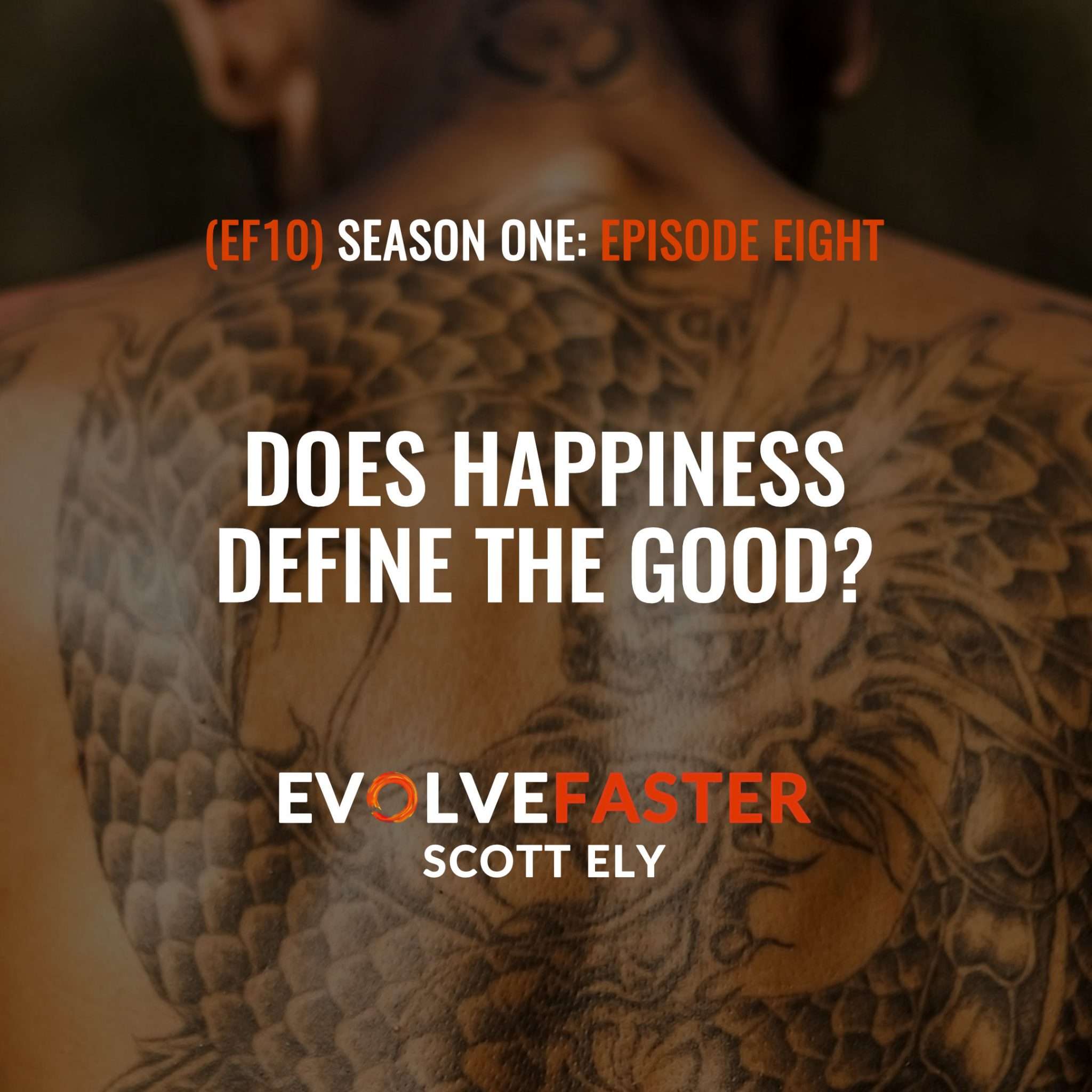 Season One, Episode Eight: Does happiness define the good? (EF10)