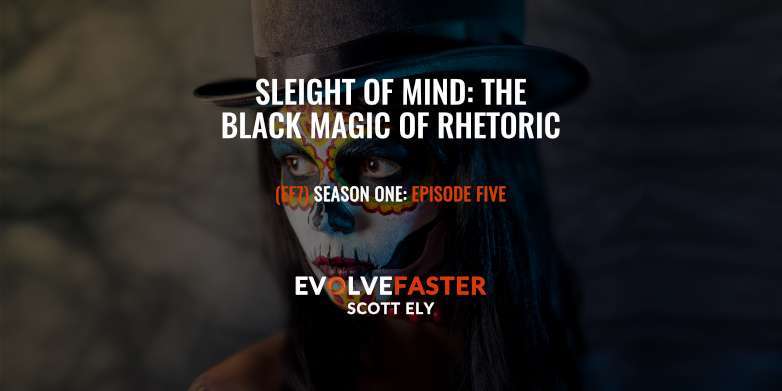 PLAY | DOWNLOAD Evolution gifted humans with minds able to create complex abstractions like language. But what if this ability is manipulated to hold power over others like a spell cast with black magic? And can we trust reason and our ability to protect ourselves? More...

Edward, a marketing master and spokesperson for the dark arts of rhetoric and propaganda, is hired to educate a controversial businessman running for an important public office. It’s Edward’s job to bestow the black magic of verbal and written manipulation on the businessman to win the election. Where the tongue is quicker than the mind—and the pen sharp enough to cut—are these skills a well-respected art? Or are they just cheap mental tricks wielded by insincere charlatans?

Since perfected by the ancient Greeks, rhetoric has slowly devolved from a respected art into a manipulative tool used in marketing, politics and any other walk of life where mental and verbal coercion pays. Rhetoric, propaganda and the strategic use of logical fallacies are mental and verbal manipulations similar to the dark arts of black magic, in that they create smoke and mirrors to change minds to believe mistruths. And unlike a magician who deceives to entertain, these dark wizards act maliciously in pursuit of profit and power over others.

But what are the real cornerstones of these dark arts of mental wordplay? And it possible to recognize—or even to fight back—when someone tries to sway you using mental magic tricks filled with lies?

SHOW NOTES: This episode is dedicated to George Orwell. See the EF7 Show Notes for details of the dedication, inspirations, references, selected quotes and more.