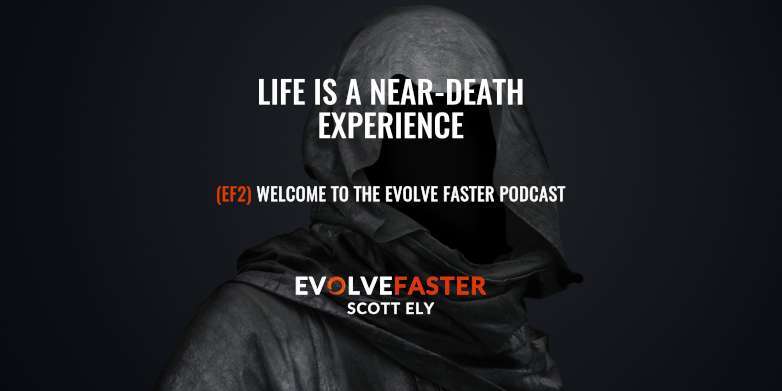 Looking to play or download the episode? Click here…(EF2) Intro: Life is a Near Death Experience Welcome to The EFP

What if You Could Reset Everything?

The big question driving Episode EF2 is… What if you could reset everything?  If an opportunity came along that allowed you to completely reset your life and start all over again, would you do it? When you sum up everything in your life, would a complete reset come as a blessing or a curse?

Let’s take it a step further. What if you could take the rest of the world for the ride with you? All the way back to the very start — to the big bang or whatever the hell came first. Although reset won’t likely come in the form of a button-push, what if significant changes to your life were only a mindset-shift away?

DEDICATION:  Episode EF2 is dedicated to George Carlin. Few others could make depressing facts about humanity so funny. Carlin was also proof that good comedians are the practical philosophers of pop culture. The difference being that instead of boring auditoriums and sterile college halls, we have dirty stages and gigantic piles of weed.

Carlin quickly moved from an amusing disc jockey to a provocative icon of everything wrong and right at the same time. Seven words you supposedly ‘can’t say’ were enough for Carlin’s arrest in the ’70s. A couple of years later, a lawsuit followed against a station that dared to air his infamous monologue. Carlin’s work spans over more than twenty comedy albums, fourteen TV specials, and several acting roles.

The more Carlin moved forward, the more his standups became both insightful and bitter. The transformation also changed his personality and reached its peak in the ’90s. Best known for social commentary and innovative wordplay, there wasn’t a topic Carlin didn’t talk about. Although many of the covered topics like politics or drugs aren’t as shocking today as before, they are still hilarious. He’d have a field day with all the nonsense on the table today that can be found in just an hour of cable news.

The Carlin quote at the forefront of this episode highlights the troublesome irony of realizing that every day is–like it or not–a near-death experience which you might not survive. As this and another quote found their way into the episode, it’s clear his work had an impact on my worldview, at least as it presents itself in Episode EF2 (the introduction to the Evolve Faster Podcast). But besides the heavy topics he dissected in so few words, he was also one of the funniest people to ever stand on the comedy stage.

If you managed to miss Carlin’s great work, here are a few links that will provide a solid introduction to the mind of a comedic genius:

INSPIRATIONS: Maynard James Keenan, best known as lead singer for bands like Tool, A Perfect Circle & Puscifer. Because really… Everything’s might be ok. Charlie Brooker, the creator of the famous TV show Black Mirror. No matter if his stories do come true, they provide us a lot to worry about while keeping it highly entertaining. Christopher Hitchens, for such a hardcore realist to provide us with one of the best definitions of the unknown entity – soul, because there’s no better metaphor. Friedrich Nietzsche, a philosopher whose attempt to define best what a human can be ended up falsely determining the worst a human can be. Episode EF2 was further inspired by The Reptilians, Viktor Frankl, VS Ramachandran, Aesop, Donald Trump, and Genghis Khan. For a full list of data and references, please see Intro Episode Show Notes.

Same as every day, you’ll wake up faced with the ability to take several high-stakes gambles—change the world, change yourself or do nothing—three core options that are always right at your fingertips. The problem is you’re most likely on auto-pilot and not consciously aware of this potential you have each day. So instead, you will probably take another step into the comfortable yet dark cave of dissatisfaction; it’s safe, but also tightly shut with a limited supply of air.

But what if things were different? What if all it took to make a major change in your life was a simple push of a button? Would you do it knowing a simple motion could change everything, at the cost that it might also plunge you into the great unknown? What does it take to make such a broad yet straightforward action…bravery, or despair?

In this introduction to the Evolve Faster Podcast, we’ll ride an hour-long roller coaster of a thought experiment designed to challenge your normal modes of conscious life experience. We’ll look at a psychological tendency that makes it difficult for you to break out of the mental auto-pilot in which you rarely acknowledge the fact that you could die around the next curve. Next, we’ll investigate what it means to Evolve Faster as a metaphor for personal and societal change. Finally, we’ll examine where the podcast will go from here into the regular seasons–groups of 10 (or so) themed episodes, written and produced in a unique fiction-meets-nonfiction format.

So buckle your philosophical seatbelt, pull down your psychological shoulder harness and lock up your kids (ok, don’t do that). Hope you’re ready to see how well your stomach can handle this existential joyride of exploring some of the foundational content for the podcast. The other goal is to prepare us for the upcoming Season One of the Evolve Faster Podcast.

Hannah Keyser, Why Do Ostriches Stick Their Heads in the Sand?. mentalfloss.com, http://mentalfloss.com/article/56176/why-do-ostriches-stick-their-heads-sand (accessed: 1 December, 2017) 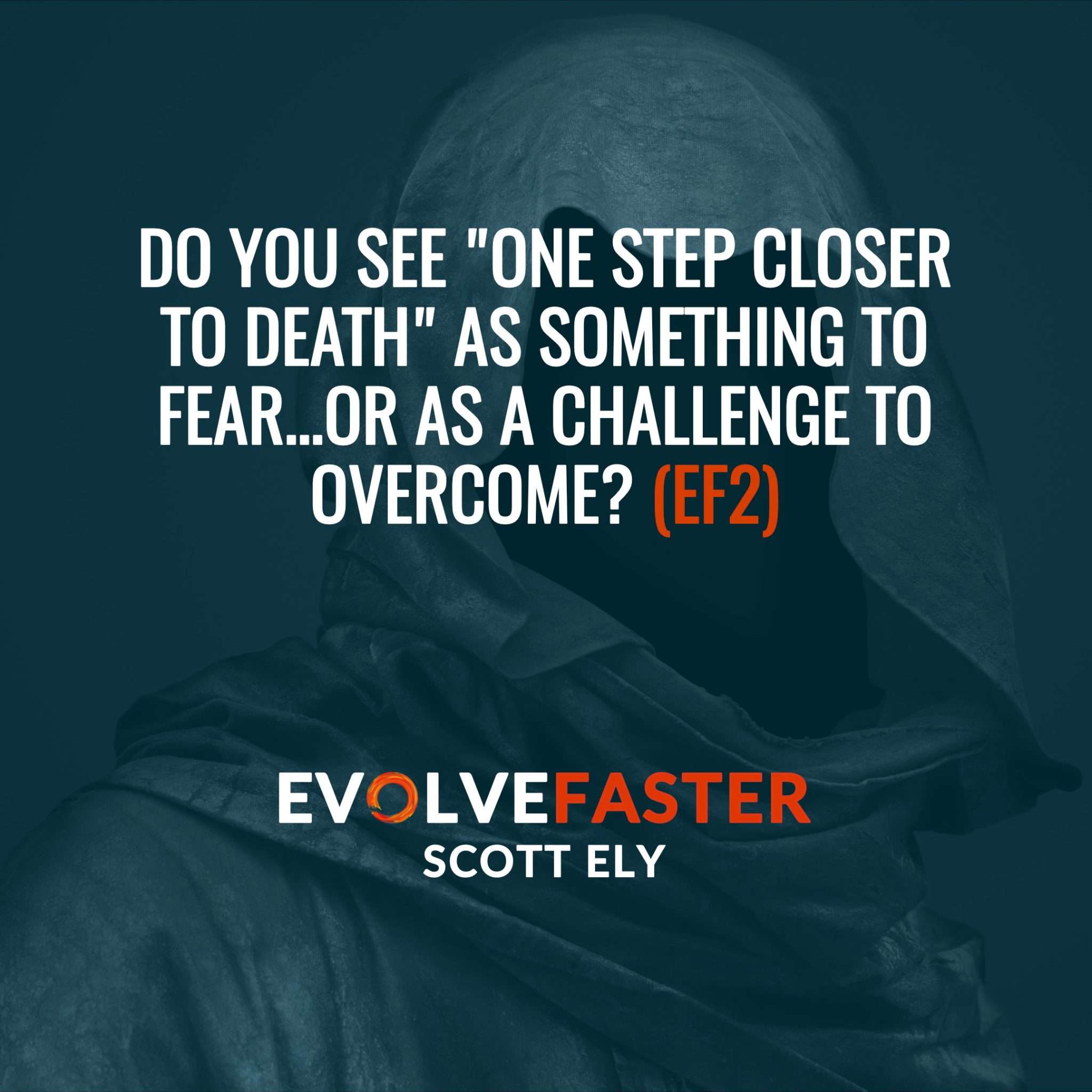 Do you see ‘one step closer to death’ as something to fear…or a challenge to overcome? — Evolve Faster Podcast Introduction (EF2) 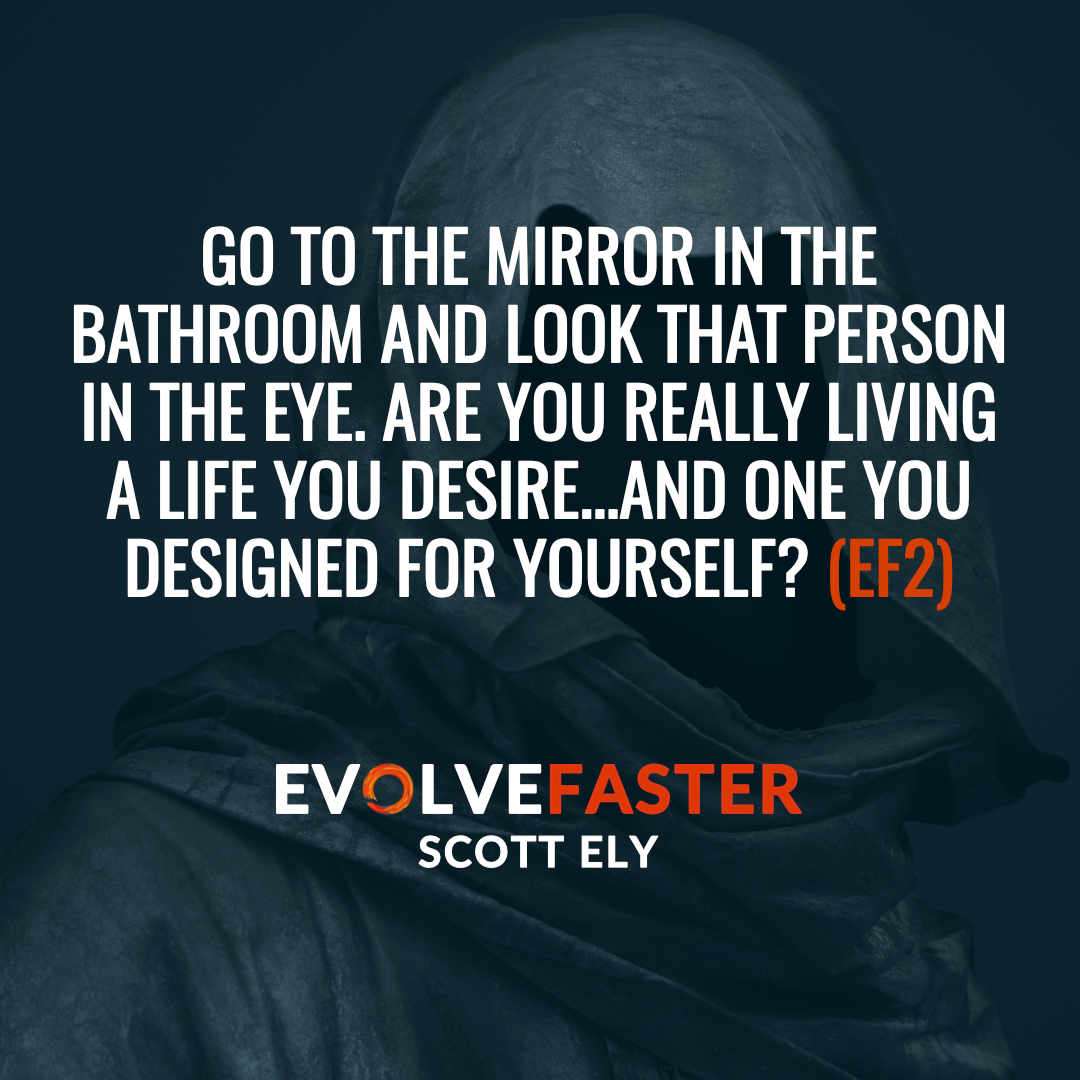 Go to the mirror in the bathroom and look at that person in the eye. Are you really living a life you desire…and one you designed for yourself? — Evolve Faster Podcast Introduction (EF2) 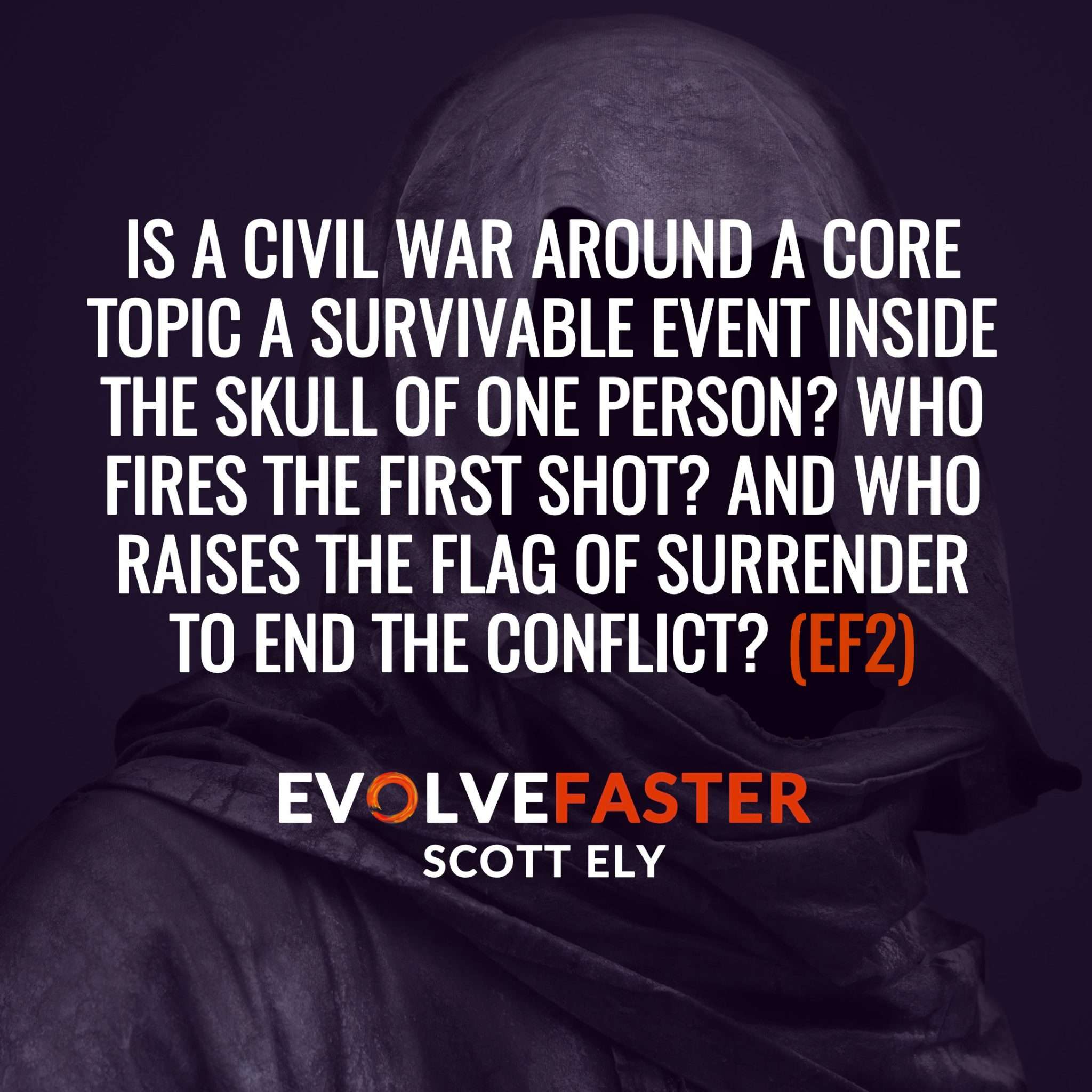 Is a civil war around a core topic a survivable event inside the skull of one person? Who fires the first shot? And who raises the flag of surrender to end the conflict? — Evolve Faster Podcast Introduction (EF2) 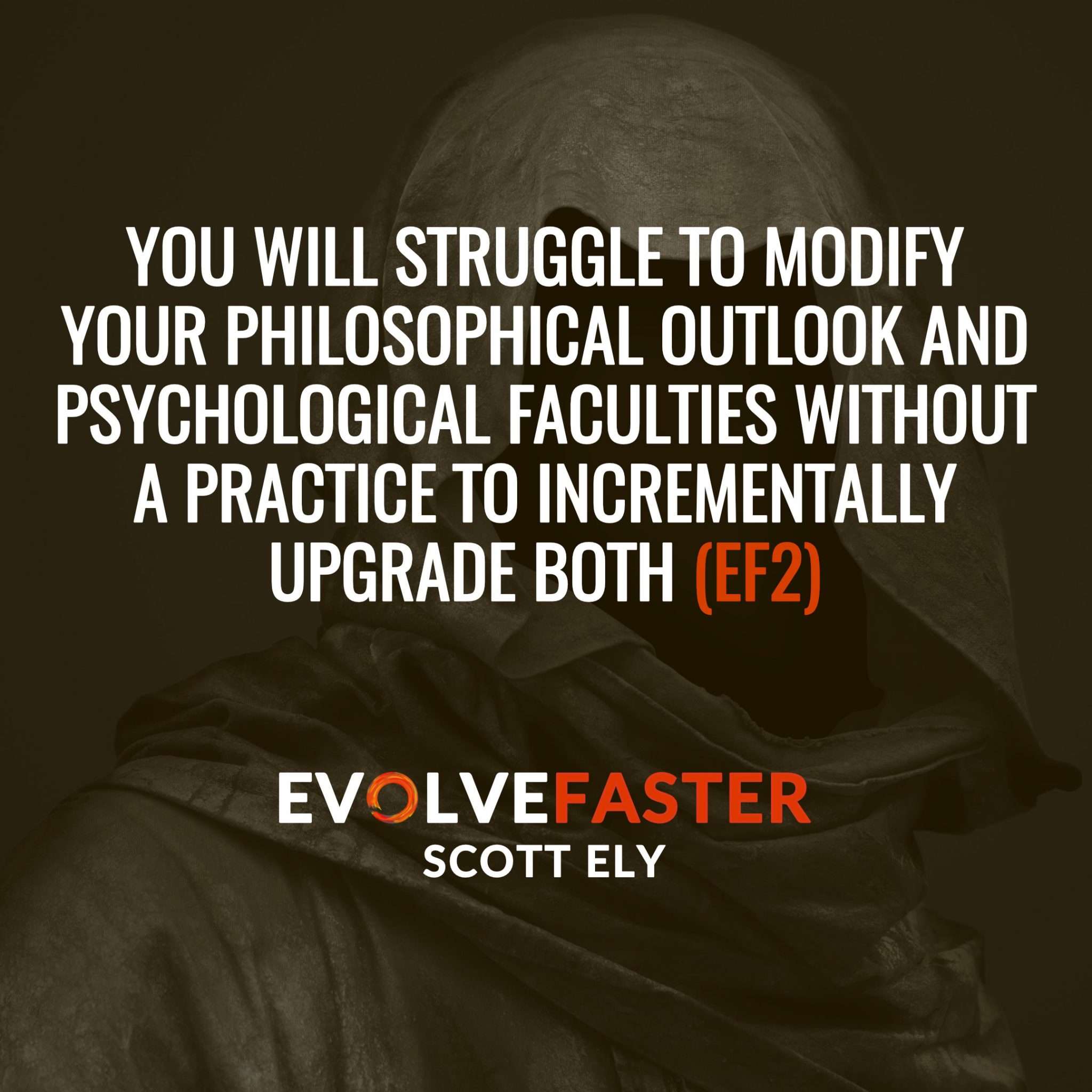 If your brain is comfortable with all of its positions, you’re probably not challenging yourself — Evolve Faster Podcast Introduction (EF2) 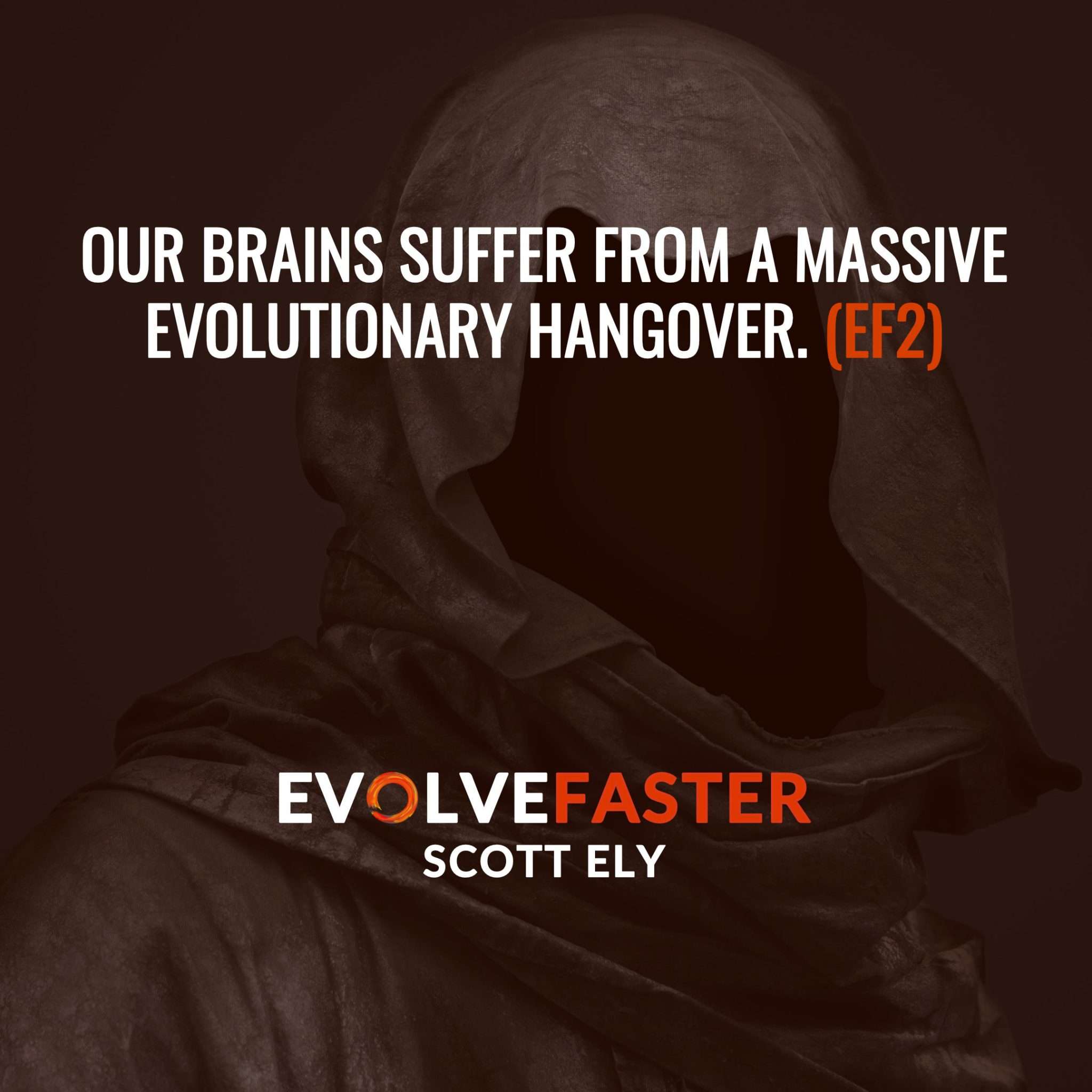 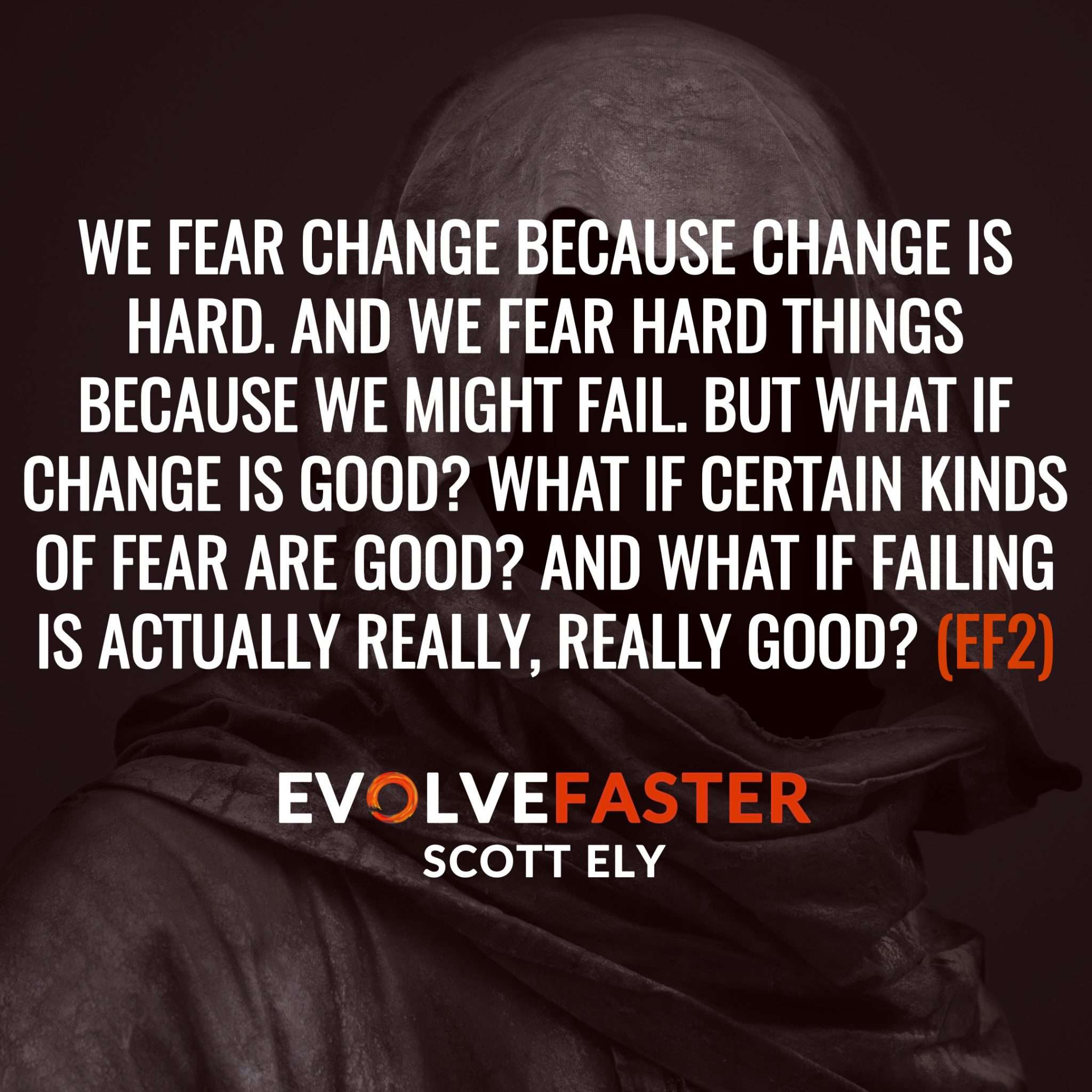 We fear change because change is hard. And we fear hard things because we might fail. But what if change is good? What if certain kinds of fear are good? And what if failing is actually really, really good? — Evolve Faster Podcast Introduction (EF2) 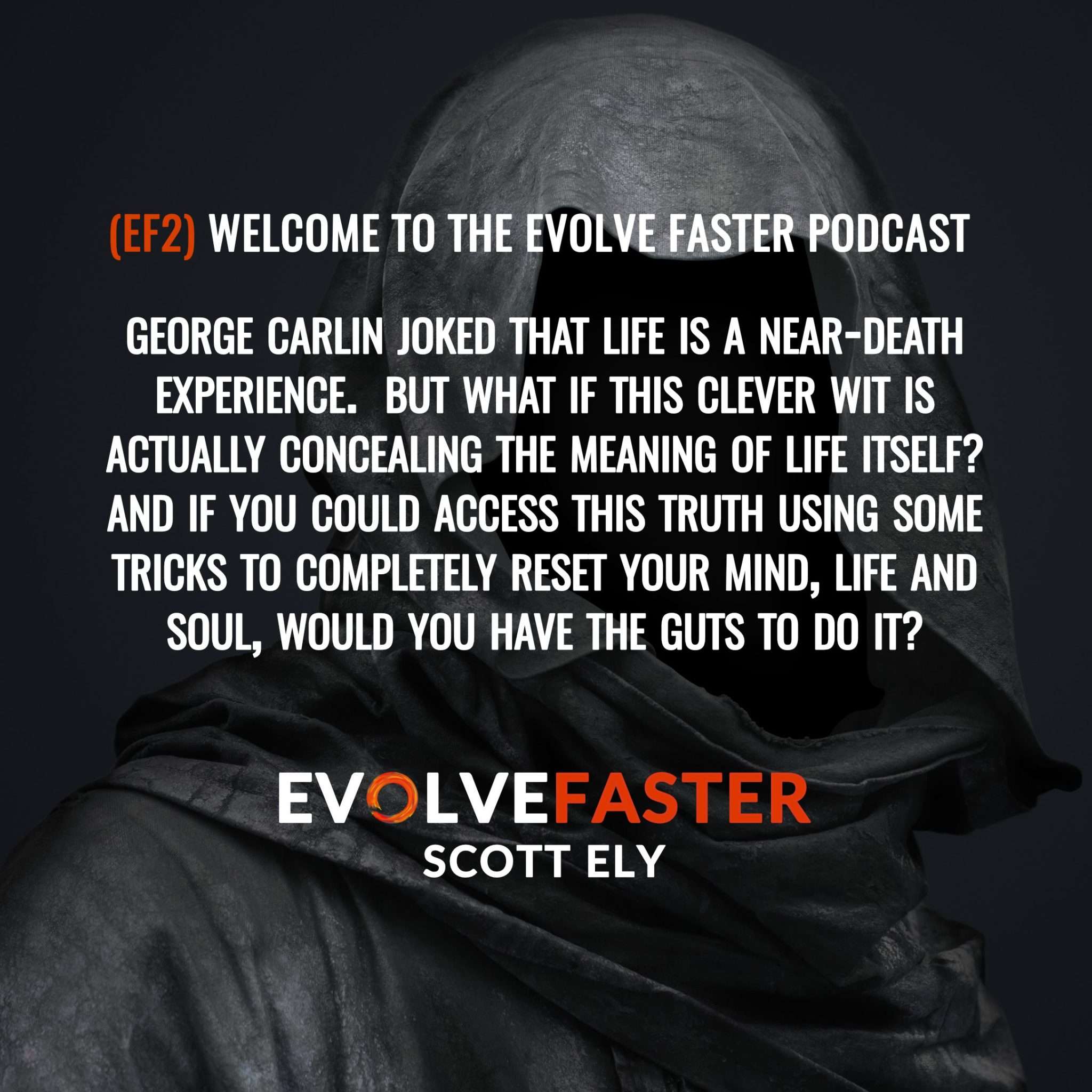 (EF2) Evolve Faster Podcast Introduction: George Carlin joked that life is a near-death experience. But what if this clever wit is actually concealing the meaning of life itself? And if you could access this truth using some tricks to completely reset your mind, life, and soul, would you have the guts to do it? 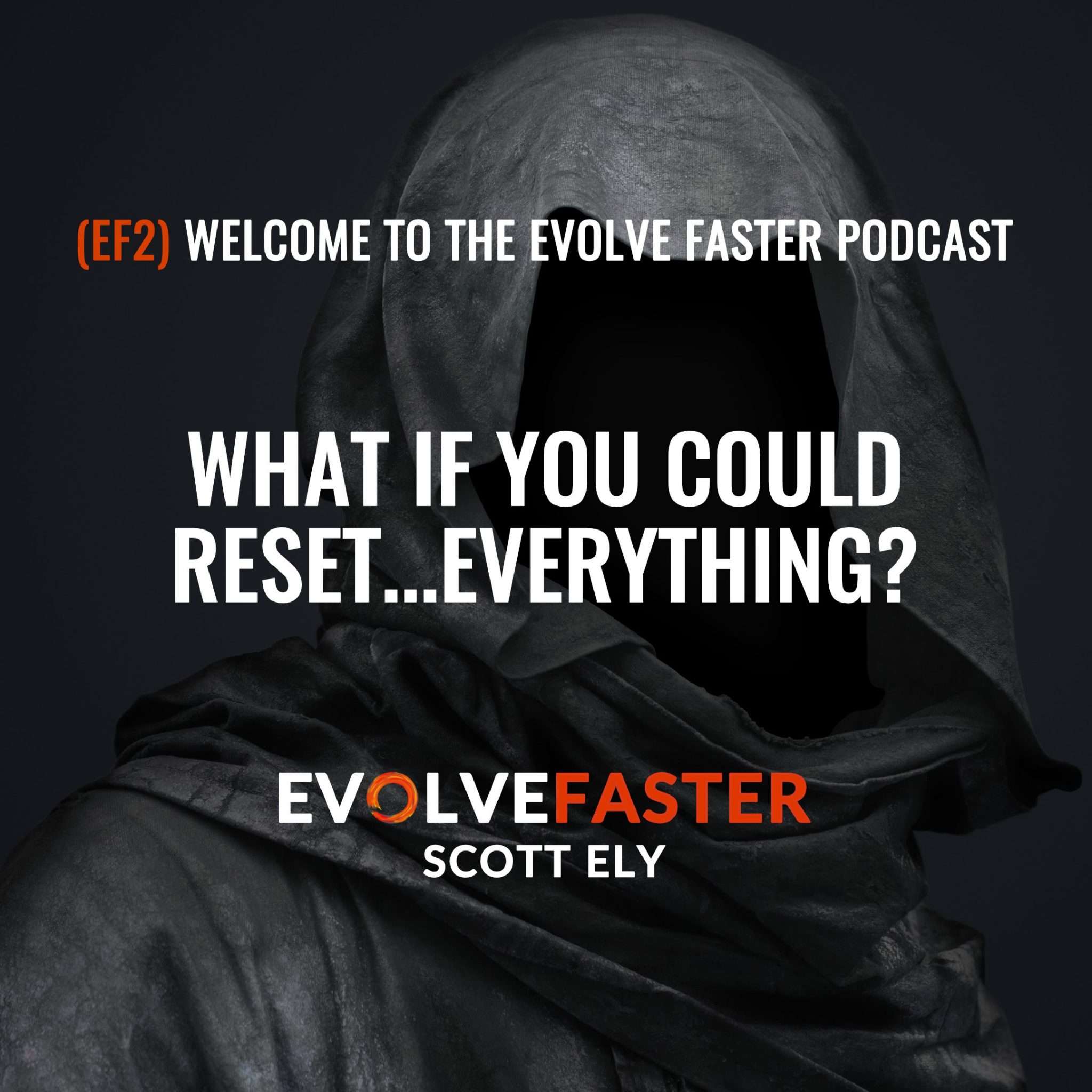 What if you could reset…everything? –Evolve Faster Podcast Introduction (EF2)